From Disney's World To DC — City Hopping For ENDO & AACR 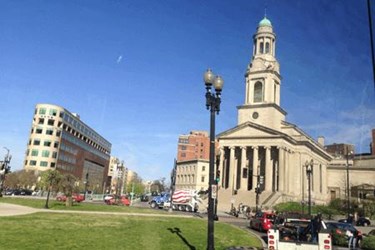 Orlando, the city of warmth and happiness by design, hosted the Endocrine Society’s annual ENDO event this year, overlapping the Washington, DC-hosted AACR, the yearly confab by the American Association for Cancer Research, by several days. I was determined to visit both shows.

At ENDO, I would be on the hunt for insights and experts to help me navigate the new territories of scientific understanding and treatment in the field of metabolic disease. At AACR, I would be gathering opinions and new data on the progress of immuno-oncology for this year’s annual IO update in the magazine.

Endocrinology is a frontier only a relatively few enterprisers in this industry have explored, beyond diabetes perhaps, because of its relative complexity and perceived risk. But the metabolic area may soon grow to be the largest of all, in number of patients, pace of scientific progress, and market potential worldwide.

Although the ENDO exhibition was relatively modest, the conference ranged over four long floors with many simultaneous and a few plenary sessions. Satellite sessions extended the conference to 14-hour days. I needed to gather as much introductory information as possible, so I had opted to attend the opening days of the event hoping for a “what’s new in endocrinology,” theme. I was not disappointed. The first plenary jumped right into one of the hottest new areas in the metabolic field — the microbiome.

More properly, I should say “microbiomes,” because the gut, skin, and other distinct places on the body harbor unique microbial environments and populations. But it is the GI tract that has attracted the lion’s share of commercialization. Companies large and small have charged head-on into “probiotics” intended to restore “healthy” microbe species in the gut. (See https://www.lifescienceleader.com/doc/how-rebiotix-avoids-the-typical-biopharma-startup-missteps-0001 and https://www.lifescienceleader.com/doc/companies-to-watch-osel-0001.) But Martin Blaser, M.D., director of the Human Microbiome Program at NYU, opened his presentation at the plenary by observing an uncomfortable truth — no scientifically validated inventory of GI microbes in normal, healthy human beings has existed to guide the industry’s efforts. Blaser reported a study by his group that appears to address the knowledge gap, along with the first important question in any inventory: is “normal” the same in everyone or unique in each individual? The answer: the same, at least in the gut.

GI microbiomes in people with healthy GI tracts are virtually universal; they contain closely similar microbial populations in species type and proportional representation. Jeffrey Gordon, M.D., head of The Gordon Lab at Washington University in St. Louis, shared a few other cogent findings drawn from his research and the literature: GI microbiomes develop in parallel with the development of the fetus, infant, and child. Certain microbiota strains are associated with healthy growth of the brain, organs, and body of children.

Hominids and their microbiomes have evolved in parallel, which leads to the “disappearing microbiome” hypothesis: In the modern world of antibiotics and antiseptics, many babies are born and raised without exposure to the ancient, co-evolved microbiota, exposure that normally begins in the mother’s vagina and continues on. Antibiotic use appears to be the main driver of disappearing healthy microbiomes in humans. As a corollary, region by region worldwide, antibiotic usage rates and incidence of obesity vary together.

Otherwise intact or undamaged , the microbiome will develop normally to a stable, mature state. Likewise, a mis-developed microbiome can disrupt normal development of vital systems in the body. If damage to an initially intact microbiome occurs very early, typically by exposure to antibiotics, the impairment will tend to be permanent unless somehow repaired. A related study by Blaser’s lab verified that a healthy microbiome can be transplanted into a damaged one to restore a normal state.

Industry implications: As if the risk equation couldn’t get any worse for new antibiotics, now we must insist they be benign to healthy microbiomes, in addition to resistance-proof and exquisitely specific to the microbes that threaten us. On the other hand, the need for innovation to meet such high standards could not be clearer. At the same time, knowing the constituency of a healthy microbiome will sweep away the current fog of commercial warfare in a newborn space sure to grow at a mass scale. As companies rush to meet the need for treatments, they should pay close attention to Gordon, Blaser, and other academic scientists who are simultaneously using preclinical and clinical science to elucidate the complex, symbiotic collection of species we call the microbiome.

My first day at ENDO included a press conference on endocrine-disrupting chemicals in the environment, new research on endocrine-associated cancers such as thyroid or prostate, and numerous presentations on dietary and other risk factors for diabetes and diabetes-related cardiovascular disease. Endocrinology’s largest area of research and drug development remains diabetes. But the endocrine system as a whole makes the infective and even cancer areas seem simple in comparison. Metabolic pathways form complex networks of interactive controls somewhat resembling those of a nuclear reactor — tweak a single dial and a host of other meters and switches change states. No simple cause-and-effect solutions may apply — aside from outright hormone replacement, a difficult process subject to its own complications.

Still, at least the more traditional, blunt-force approaches avoid the kind of controversy that bedevils the “innovative” side of the field, such as safety, pricing, and therapeutic combinations. In diabetes, the backbone of therapy remains insulin, which in its recombinant form has become a commodity. For diabetes Type 2, the other two mainstays since their introductions decades ago are metformin, which increases the body’s insulin sensitivity and reduces glucose production in the liver, and the sulfonylureas, which boost insulin production in the pancreas.

At a formal debate, two diabetes treatment and research veterans took widely opposing positions on newer diabetes drugs introduced since the original three classes became the mainstays. First, David M. Nathan, M.D., took the podium to say only those older classes, all products of the 20th century, have proven their worth in practice, together controlling not only diabetes progression and symptoms, but also complications. Showing historical research data to support his case, he added that newer diabetes drugs also have the most serious side effects, compared to the older ones, but their prices and profit margins keep rising.

Nathan’s debate opponent, Daniel J. Drucker, M.D., of the University of Toronto, showed his own set of data to argue the newer drugs do offer an added benefit. His case seemed mainly centered on a single class — the GLP-1 (glucagon-like peptide-1 receptor) agonists, which he sees as a superior alternative to insulin in controlling hyperglycemia and weight. He also cited data showing the benefits of empaglifozin, a “gliflozin” or SGLT2 (sodium-glucose transporter) inhibitor, a blood-sugar lowering medicine, in reducing the cardiovascular complications of diabetes, such as heart failure and death. “This is real data, not Pharma hype or marketing,” said Drucker. At another point, however, he also allowed that the costs of the newer drugs could be a problem for payers and patients.

By the reaction of the audience, I would say Nathan prevailed in the debate, at least to the point of raising professional skepticism about the diabetes 2 space, which is so crowded with products it may have spawned the pejorative term, “me-too drugs.” But in a way, the debate flogged a dying horse; the “newer” diabetes 2 drugs present a pharma-industry example of pile-on R&D born in the decades before 2000, when mass-market medicines were still in vogue. Later products in the diabetes 2 space target narrower populations with specific, stubborn symptoms and thus bear more resemblance to the current industry favorite: specialty drugs. This debate will only continue and even grow if the U.S. healthcare system collapses into a pay-as-you-go model, in which only those who can afford to pay for the more expensive drugs may have effective access to them, whatever their benefits.

We will be returning to much of what I saw and learned at ENDO in a future look at the field of metabolic diseases and the new therapeutic approaches in the works for such conditions. Similar to our previous series on combination cancer immunotherapy, our examination of the endocrinology area will take a deep dive into the scientific and business issues affecting new applications in the field.

After two packed days at ENDO, I said goodbye to Orlando and the welcome, early spring warmth of Florida and headed for the nation’s capital to catch three days at AACR. I stayed in a small hotel only a few blocks from the White House. DC was sunny but breezy-cold in the shadows.

In this industry, people often seem to live and work far from the folks whose suffering the industry is dedicated to relieving. Every so often during the presentations I saw at AACR, a slide of a patient would appear, showing something like tumors invading the patient’s face. I would then experience a shock, where all the statistics, data, and points in the presentation would collapse into the real picture of cancer affecting a real person.

Business, science, and all of the other civilized resources we employ are just tools for dealing with this horrific reality. And, in all honesty, our tools for “fighting” cancer have long weighed heaviest on the wrong end of the risk/benefit equation. Seeing a real patient should only motivate us to aspire to something better than people now typically get from cancer treatment. For decades in the long-ago declared war on cancer, treatment has remained a heroic tale of the patient’s endurance through side effects nearly as dangerous and horrible as the disease itself, with benefits measured in mere months or weeks of survival — and only by statistical contortions, at that. It is almost like a rude awakening to know we finally have some real prospects to offer people, even if not all people, in cancer immunotherapy.

I won’t attempt a full account of my three days at AACR here, because it will form part of the basis for our annual update on immuno-oncology, slated to run this year in our June issue. My overall impression of the conference was that IO now reigns as the central pillar of cancer treatment. Academics and companies are exploring every nook and cranny of the new IO agents, even as a consensus has formed around anti-PD-1 agents as the backbone strategy. Both sectors are conducting extensive basic research on the molecules and mechanisms already used in practice. BMS is parsing out ipilimumab and its analogs to help test possible next-generation anti-CTLA-4 compounds, and any number of labs are trying to figure out how to overcome some tumors’ resistance to IO therapy, to stimulate generation of the right kind of T cells, and generally to widen the application of IO to ever more cancers and patients. On the clinical side, universities, cancer centers, and companies are conducting, and often collaborating, on hundreds of combination immunotherapy trials.

Yet the immune system, like the metabolic systems revealed at ENDO, is a highly complex and interactive one full of unexpected connections and feedback loops. We have been lucky to catch sight of immunity’s critical components in various states of action, but we have a long road of learning ahead before we can see and understand the whole picture.