SNAPSHOT
Immune Pharmaceuticals is a renewed and broader company as the result of its merger with EpiCept, which is working its way toward a shareholder vote. The merger arose as the answer to EpiCept’s financial struggles and to Immune’s need for a wider portfolio of products to balance its ambitious development program for its main compound, bertilimumab. Licensed from iCo Therapeutics soon after Immune’s founding in 2010, bertilimumab could prove to be one of the industry’s most versatile drugs, if the extensive lineup of clinical trials pans out. Immune is targeting indications for bertilimumab in cancer, ulcerative colitis, asthma, and other inflammatory diseases. Its antibody-conjugate NanomAbs platform is in preclinical development for cancer. EpiCept’s pipeline, including “vascular disruptive agents” and a cancerrelated pain medication, AmiKet (amitriptyline/ketamine), give Immune a wider window into oncology.

WHAT’S AT STAKE
One apparently unique aspect of the initially Israel-based Immune Pharmaceuticals is that it started as a business rather than a research arm. Its model is based on in-licensing and product development rather than internal discovery and development. Its entire portfolio reflects that model. “Immune’s strategy is to build a biopharmaceutical company with critical mass in a capital-efficient way — in a shorter time frame and with an improved risk/reward for investors,” says CEO Daniel Teper. He says Immune’s total burn since its inception in 2010 is only $8 million, including nonequity financing and cost of acquisitions. But its history, including the recent merger with EpiCept, also illustrates the sometimes complex maneuvers entrepreneurial life sciences companies must take to survive and grow.

Struggles and higher aims for the companies on both sides of the merger made the union all the more essential. Most publicly, EpiCept had suffered through a stalled regulatory review in the United States of a product already approved in Europe. Its cancer drug Ceplene (histamine dihydrochloride), cleared by the EMEA in 2008 for acute myeloid leukemia (AML) remission maintenance, ran into a crisis at the FDA following post-approval trial failures by Avastin and other products; without notice, the agency decided it would accept only overall survival (OS), not progression-free survival (PFS) data for cancer drug approvals. Trial endpoints for Ceplene were PFS, not OS. Licensed to Swedish Meda Pharmaceuticals, Ceplene’s Euro sales stagnated. EpiCept’s market cap fell, and it faced difficulty raising money. Similarly, Immune wanted to boost its money-raising capability, chiefly in the United States, as well as its pipeline. EpiCept offered a way to both ends, and thus the needs and strengths of the two companies were complementary.

“The rationale for the EpiCept merger is faster access to U.S. public capital markets through a merger between two operational companies, allowing for up-listing to a U.S. national and more liquid market such as NASDAQ or NYSE,” says Teper. Such funds will be essential to fuel Immune’s ambitious development programs for bertilimumab, the NanomAbs platform, and EpiCept’s contributions, including the chemo-related pain drug AmiKet. 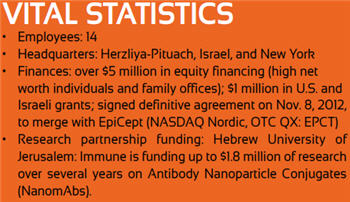 It is always fascinating to capture a view of a company in midmerger — admittedly, a big part of Immune’s appeal at this point. But the larger lessons go beyond finding a complementary merger partner and speak to the survival of the life sciences species. Creativity and innovation in this industry are not confined to science. Immune’s product acquisition model may actually make more sense than starting a new business from the laboratory bench. Sometimes a company may have a better shot at success when the business starts first with a therapeutic focus, then finds the science.