Include CDMOs In "Drugs, Money And Secret Handshakes" 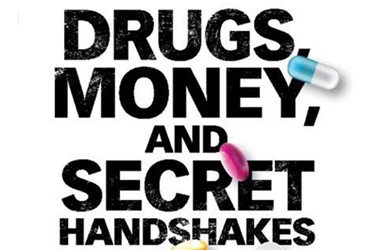 “Drugs, Money, and Secret Handshakes” is one hundred power-packed pages of rich data and sober analysis.

Outsourced Pharma was provided a pre-publication copy by author Robin Feldman, the Arthur J. Goldberg Distinguished Professor of Law at the University of California Hastings. The book goes on sale April 11th.

My thoughts upon reading the book:

Feldman and I spoke by phone about these four points and her new book.

A Language Of Price Inflation

Hint: All describe some way to raise drug prices on patients, and enrich the system’s players. These pricing ploys push prescription drug prices to “an alarming and puzzling level,” says Feldman.

The system of course has other components, but the main three are: drug companies, pharmacy benefit managers (PBMs), and insurance companies.

To date, not a single solution offered up has abated drug price increases within the system. As one example, overall pricing continues to skyrocket despite “roughly 80 percent of the prescriptions in this country are filled using generic drugs.”

“Quite simply,” writes Feldman, “internal incentives push every market participant toward behavior that increase prices, knocking out the normal checks that should operate as brake-points on the market.”

Feldman iterates there’s plenty of blame to go around, but also writes, “At the center of the web lies the PBM system.” And the pharmacy benefit managers scheming with biopharma companies “together use the system to increase revenue to the drug firm and income to the PBM by raising list prices.”

She adds in the book: “One need not ascribe any sinister motive to the drug companies.” She believes they’ve simply found a way of operating with the system [they did not create] to their own, greatest advantage.

I ask Feldman to elaborate.

“Pharmaceutical companies are profit-making entities. Imagine if a CEO went in front of the board of directors and said, ‘I'm going to lower prices and reduce our profits. It's the right thing to do.’ The CEO would be skewered. You have to change the incentives if you want to change the behavior. Now everybody's pointing fingers at insurance companies, the pharma companies, the PBMs. In my view, the bottom line is there's plenty of blame to go around, but how do we fix the problem?”

Nobody seems to know, although she offers some ideas for component solutions at the end of her investigation.

I then ask Feldman if she agrees with me that attempts at solutions like “Obamacare” or “single-payer” are misguided, and have or will make the system worse.

She collects her thoughts before answering. “This country does not have a strong history of organizing its economy in that fashion,” she replies. “We haven't necessarily been successful at it, and it tends to evoke images of political systems that rank-and-file voters fear. At the end of the day, we’re a free-market economy. We believe in innovation and competition, we have to figure out how to forge a pathway that is consistent with our history as a nation, and that encourages those things.”

Picking Out The PBMs

While apparently in every other market, industry, or individual company today, intermediaries are being excised or streamlined (including internal middle management), our drug distribution system is ballooning at the middle, and most of the air is going into PBMs.

“PBMs historically developed because the flow of claims was something the health insurance companies and self-insured employers couldn't manage on their own anymore,” explains Feldman. “But when systems digitized, PBMs had to find a way to differentiate their product, provide value, and bring in income. That’s when they developed the middle-row position that’s blossomed in a way which is great for PBMs, good for drug companies, but not so good for others in the system.

“So I agree, PBM reform is essential for moving forward, but I worry that government will declare victory and bring the troops home … if we don't understand and anticipate where these money flows will go next, we may not make the full progress we'd like.”

Which brings us back to us – the drug development and manufacturing outsourcing industry has made progress.

I ask this in all seriousness: Are we the only component today in the meandering chain of events that is dedicated to reducing the price of drugs? CDMOs of all sizes and models, and at global locations, exist so biopharma companies can develop and manufacture drugs at reduced pricing.

The CDMO industry is competitive. There are no extra-ordinary pricing models. We operate on fee-for-service, FTEs, quantities of material delivered, the direct cost of raw materials, plant time. Our supply chains and delivery routes don’t delegate to intermediaries tacking on additional pricing that then feeds reciprocal (and agreed upon) price increases throughout the chain.

CDMOs have added technology, expanded services, integrated, streamlined, undertaken lean and quality initiatives, all to be as profitable as possible by reducing costs for themselves and their biopharma customers.

I know how the contract research, development and manufacturing industry originated. It did so out of a direct economic driver: To lower development and production prices.

I don’t know how the overall, convoluted prescription-drug system in the U.S. came to be. It seems nobody does. All any potential patient or consumer knows is “the problem is the system.” We’re left questioning how a market so nonlinear to any other industry in the U.S. exists.

“I would frame things a little differently,” says Feldman. “Some of these developments formed organically; some of them are strategic behaviors. All of it is unrecognizable in comparison to any other industry in the country that we can think of. I would, though, spend less time trying to understand how we got here, and more time trying to visualize how to get to where we need to be.

“The last thing I would say is there's real anger and real pain among citizens throughout the country. Sometimes that can translate into action.”

Because currently, we’re at a point where we’ve been duped into believing that the free markets born of capitalism, entrepreneur spirit, and government non-interference, cannot decrease the cost of our drugs.

One way to fight that false narrative is to talk more about the subsection that bucks the trend of perverse incentives, and thrives on direct competition, and competitive pricing.

That would be you, Outsourced Pharma readers. Let’s get the message out that free enterprise works, and it works best without self-serving intermediaries.

In part two of my discussion with Robin Feldman, author of “Drugs, Money, and Secret Handshakes,” we’ll take a look at some drug pricing solutions that are not what they appear.