A “breaking news” partnership deal with Roche highlights the stakes for this key player in DNA vaccines, as well as presaging the role of combination cancer immunotherapies.

SNAPSHOT
Inovio is developing DNA-based vaccines and its Cellectra Electroporation Delivery Technology platform in multiple disease areas — therapy for cervical, prostate, breast, and lung cancers and Hep B & C; and prevention of HIV, flu, and malaria — with the combined support of the U.S. government, the stock market, and numerous research grants.

WHAT’S AT STAKE
On the eve of this report, Inovio announced its massive partnership with Roche, giving us a special opportunity to spotlight a company at a major juncture. I had already initiated an exchange with the company’s CEO, J. Joseph Kim, when the announcement came, so I quickly added some questions related to the partnership and its implications for the development path of Inovio’s DNA therapeutic vaccines and electroporation delivery platform. Landing a deal of this magnitude with a Big Pharma raises the question: What is so special about this vaccine company?

“We have generated best-in-class immune responses in both animal models and humans,” says Kim. “These are highly competitive, large market areas in which we have developed a potent and safe platform of clinical products, that based on our data to date, would be competitive with any other approach to immunomodulation.” Those same areas have also defeated many other contenders. But Kim gains confidence from the immune response, specifically T-cell response, to Inovio’s products and platform, as well as from the “validation” represented by the many grants and investments supporting the company, now capped by a partnership bound to capture much awe and respect. The delivery platform addresses a common failure point for DNA vaccines — overcoming millions of years or so of evolution in cells’ ability to resist entry of foreign materials into the nucleus — with proprietary intramuscular and intradermal electroporation devices.

Kim says the company has carefully selected the many areas and indications for which it is developing vaccines, based on the absence of existing or alternative treatments. For example, the lead program, VGX-3100, addresses cervical cancer, an HPV-associated disease where no other option exists but a surgical procedure. “As a science-based company, the science told us that developing a vaccine against HPV-associated diseases is a viable path.”

Inovio has managed the risks and costs of development by “establishing a broad portfolio of vaccines and immunotherapies,” Kim says. “Our platform allows us to pursue both antibody targets and T-cell targets across a broad range of diseases and conditions. We might be the only immunotherapy company that is pursuing both sets of targets — and that spreads risk across a broad and diverse portfolio.” 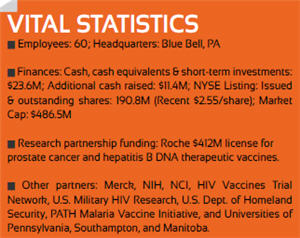 To what extent will the Roche partnership constrict development plans for the affected prostate cancer and Hep B programs? Kim says only that the deal terms specify “conventional development-based regulatory and commercial milestones.” But the partnership also reveals Roche’s strategic recognition that the future of cancer immunotherapy depends on combinations of multiple agents.

“Past successes for drug treatments for HIV and HCV suggest that a combination therapy might be the best strategy for an effective cancer immunotherapy,” says Kim. “Early results from the checkpoint inhibitor studies demonstrate that taking the brakes off the T cells is an important step to an effective cancer immune therapy. However, 25 years of T cell immunology studies support that active immune therapies to accelerate the specific production of T cells using a therapeutic vaccines approach could further enhance the impact of cancer immune therapy. Inovio is leading the path for the latter part of this winning formula.”