Mental Wellness — The Next Big Thing 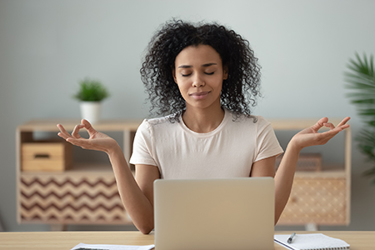 Within minutes of tennis professional Naomi Osaka (ranked #2 in the world) withdrawing from this year’s French Open tournament in May, I received a group text from some of my tennis buddies. To sum up the gist of their responses, it would be that Osaka needed to “man up.”  But this week we saw another world-famous female athlete, Simone Biles, also seemingly at the peak of her craft, withdraw from Olympic competition in gymnastics. Like Osaka, Biles cited the need to focus on her mental health as the reason for her withdrawal.

The fact that these two women, millennials born in 1997, opted to withdraw from competing in sports they love and are extremely good at, to focus on their mental health, should draw the immediate attention of every leader — at every organization. Because we know there is top talent at every level of every organization. Further, we know that every experience of the COVID-19 pandemic was very individualized. And if top female athletes are experiencing issues with focus impacting their ability to perform at their best (most likely heightened by their experience of the pandemic and other incidents of 2020 and 2021 [e.g., George Floyd, protests, the attack on the Capitol]), then isn’t it likely that employees throughout your organization could be experiencing similar struggles, as anxiety and depression among U.S. adults has increased threefold? And, as these two demonstrated a willingness to take a path that differs from the macho-man rules of “toughing it out” (more on that in a minute) that we men developed and have forever honored, then I say it is likely that those struggling employees, especially in this job market, are going to move on to supposedly greener pastures before most leaders even have a clue. How well will that serve those striving to fill their teams with tomorrow’s diverse and inclusive top talent? In my opinion, Osaka and Biles represent the tip of the mental health iceberg that could soon rip into the United States (and elsewhere) — unless leaders embrace mental wellness as being one of the next big things to focus on at their organizations, and the biopharmaceutical industry would do well to lead the charge.

In a blog post a few months ago, I wrote about CNS being a big opportunity on multiple fronts. One was from the perspective of a leader seizing the opportunity to check in on employees toward making their teams stronger. Another was in the therapeutic category of CNS drug development, a near $15 billion market. But that’s when I was thinking small. If you think bigger, mental wellness involves any product that can help people better manage their mental state. A 2018 estimate of the global mental wellbeing market size tallied $196 billion. But as this was pre-COVID-19, it is likely significantly bigger today. From apps, to publications, to programming, to technologies, consumers will increasingly seek and reward those developing mental wellness products and services. Companies should lean into this opportunity, especially with women consumers, and here’s a few reasons why.

But there are other reasons, and these can be found in the differences between how genders think. For example, when it comes to mental health, women are not only more open to talking about it, but obtain help for things like depression in greater numbers than men. Thus, it is my opinion that companies would be well served to not only beef up their benefits around mental wellness for employees, but strive to destigmatize mental health challenges in the workplace. As for those companies working in the areas of mental wellness, the low-hanging financial fruit is obviously women, as they are more interested and willing consumers. However, improving mental wellness in men remains a major societal opportunity beyond just making a profit.

Women As Leaders Need To Be Willing To Rewrite The Rules

While it is somewhat surprising to see the outpouring of support for Simone Biles, given the U.S.’s seemingly insatiable appetite for all things sports and winning, it is not at all surprising to see the responses of some men. For example, Piers Morgan, an English broadcaster and TV personality, wrote about Biles’ decision, “You let down your teammates, your fans and your country.” Of course, he went on to comment on how cocky she was, how she quit, and how he would have preferred the old Simone who would have done whatever it took to win. Perhaps she did just that. How many times have we watched professional men’s sports where we see an athlete struggling? “Get him out of the game,” we yell at the TV screen during the NFL season. Those who have competed in sport know that everyone can have an off night or hit a slump, and staying in the game, just because you are the star and team captain, well, that isn’t always in the best interest of the team. But our he-man rules argue otherwise, which is why few struggling male athletes would ever ask to be taken out, because doing so is to be perceived as being weak. “She was supposed to lead by example,” wrote Morgan. I’d say she did, just not in the way most macho men think leaders should. And this, I’d argue, is exactly why we need more women leaders in corporate boardrooms and political office. Because sometimes, leading requires making the difficult decision to put your ego aside and yourself on the bench. And while decisions by Osaka and Biles don’t seem to square with how most men have been brought up to think, as more women make gains in positions of power, hopefully that will change too. But this requires women leaning into what makes them different, along with the willingness to rewrite the rules. Because if we want the world to be changed for the better, the last thing we need are more women in positions of power who not only think and behave like men, but willingly continue to play by their rules.