Beyond the human genome lies the much vaster field of the microbiome, where this company is finding new disease mechanisms, biomarkers, and therapeutics.

SNAPSHOT
Second Genome has staked an early claim to a piece of the new microbiome space; in fact, the company may be helping create the space even as it occupies it. It has also made an equally early leap into partnerships with some of the biggest biopharma companies, reflecting the quickly growing industry awareness of “microbiomics,” the study of disease-causing interactions between microbes in humans and their hosts. The company is also discovering and developing its own therapeutics and biomarkers based on its knowledge and platform. 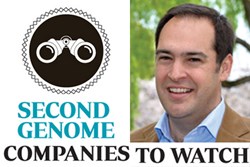 WHAT’S AT STAKE
Human genome research once promised us the keys to defeating many diseases, if only we could tie particular genes to each condition. It turns out genes do play a leading role in morbidity, but not just human genes. Another, even vaster genome surrounds and fills us — a regular stew of bacteria, viruses, and genes — aka the microbiome. The microbiome creates the immediate environment for our genes as they play out their part in disease mechanisms.

“We now understand that biological processes such as inflammation, barrier function, metabolism, and energy homeostasis are directly linked to our microbiome,” says Peter DiLaura, president and CEO of Second Genome. “As our understanding of microbiome science has moved from correlations to causal relationships, it has become a relevant area for drug discovery.”

That is why, in DiLaura’s view, this is the right time — scientifically, medically, and commercially — to create a new microbiome space, and his company is one of the earliest innovators in the field. “Second Genome has focused on building a platform that enables us to identify and understand relationships between the microbiome and host biology, which provides access to novel targets and therapeutic approaches.”

Second Genome studies the interactions between microbes that live in humans and the host human cells in causing a disease state. Such interactions can be positive or negative, either helping to maintain a healthy condition or to disrupt one. Diabetes, colitis, and some types of infection are among the diseases caused or exacerbated by disruptions in the normal dynamics between microbes and humans. The company has aimed its platform at discovering and developing small molecule drugs, peptide biologics, probiotics, and symbiotics to intercede and modulate microbe-microbe and microbe-human interactions.

When the company was formed in 2010, it faced a steep educational slope, but nowadays many of the large pharma and biotechs have matched speeds with the microbiome concept and are actively interested in its drug discovery potential. Some of their education has come through basic, preclinical research collaborations with Second Genome. More recently, Janssen and Pfizer have upped the ante with partnerships aimed at identifying drug candidates.

The partnerships still involve the kind of basic research that normally would take place in a university lab — another case representing the current, to some troubling, trend of commercial entities taking over academic science that would otherwise be shared with the world. But DiLaura considers private-enterprise funding and organization essential to making treatments available for patients in a practical time frame. “It is our expectation that commercial involvement can push this important work further more quickly.”

Meanwhile, Second Genome has plowed ahead with its own products in the pipeline. It has three preclinical programs and “additional discovery efforts” of its own, but has announced no details. “We have worked across a wide range of disease areas and have a significant amount of experience in the complexities of experimental design, execution, and analysis in the highly specialized microbiome space,” says DiLaura. “This work has been highly leveraged for our own therapeutic programs.”

May 2014: Announced collaboration with Pfizer to apply Second Genome’s platform to conduct the largest study to date in understanding the microbiome in metabolic disease.