Because I live only a day-trip away from San Francisco, it is convenient for me to travel there for industry events — a trek always accompanied by reflective reveries for the hometown of my film-student days. So, for the third time since June, and with another week scheduled for early January, I am once again city-bound, leaving home mid-day and getting into my hotel in plenty of time to make the 5:30 PM reception for the annual Pantheon Awards dinner, held by the California Life Science Association (CLSA).

It is just about a month and half since I was last here, in the same building, the Westin St. Francis, a structure completed in 1904, only to burn up after surviving the great earthquake of 1906. My previous visit was to the BIO Investor Forum, chronicled in the previous blog, “BIO Shines in San Francisco.” Union Square, across the street, opens up the sky view and lets the light spill into the heart of town. Thus, it is easy to continue the theme of light for this quick return trip. But this time, the illumination comes in a different form, not sunlight but the spotlight. CLSA honors seven award recipients, just about the right number for a reasonably well-paced dinner ceremony.

Pause for explanation: CLSA is a relatively young reincarnation of the BayBio association, created in a merger with the California Healthcare Institute (CHI). Its educational arm, the California Life Sciences Institute (CLSI), mirrors the preceding BayBio Institute. But CLSA and CLSI cover biopharma companies throughout the state. Such a large industry magnet also attracts companies from the entire west coast into its field of influence. Now, back to the ceremony.

I am glad of two things right off the bat — there is a reception, and the reception is quiet enough to hear someone sitting next to you. (There is loud music afterwards, but a word on that later.) It is a youthful crowd, and every face seems new to me. Actually, it feels great to know I can still go somewhere in this industry and not recognize a living soul. At some point, I find a chair at a table where it turns out one of the award winners is sitting. I recognize and introduce myself to Rusty Williams, president and CEO of Five Prime Therapeutics, a company featured in our Combination Cancer Immunotherapy series. Five Prime is receiving the Pantheon award for partnering. We begin talking about some of the other projects I’m pursuing, especially my ongoing quest to find suitable candidates for the occasional series, Industry Explorers Blaze On.

Williams homes in on the series concept. “Industry explorers must blaze on,” he says. “This is such a tough business, and you have to keep going despite so many obstacles and even setbacks. You must continuously blaze the trail ahead using all of your valuable experience and learning new ways to overcome adversity in the pursuit of new science, new business, and new medical advances.”

It is also good that the event planners have allowed a bit of time for people to gather at their tables for dinner and get to know each other before the awards festivities begin. Most of the folks seated with me work for the table sponsor, a small Bay-area company, Global Blood Therapeutics, which is developing a drug for sickle-cell disease. A relatively new management team now appears to be pushing the company into a more intensive funding and business development stage. We all pause our conversations, however, as a raucous pair of musicians I dub “The Blues Brothers of the Cello” carry on a loud slam, showing off their improvisational chops. Yes, this is a youth-leaning crowd. 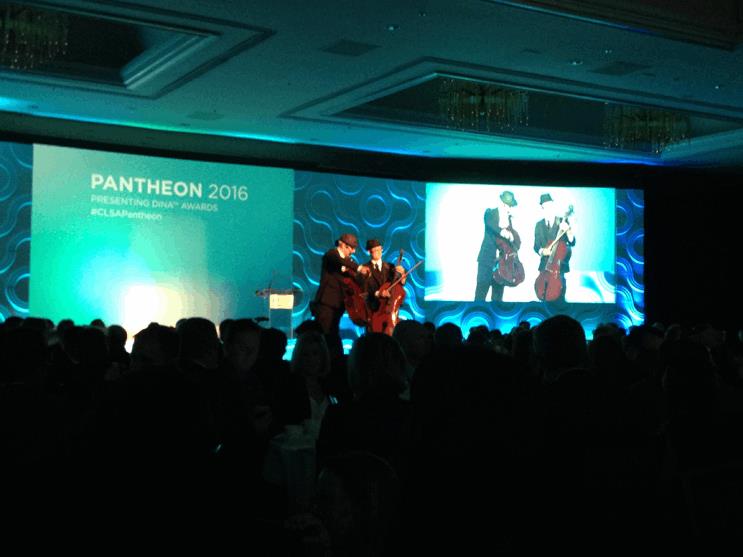 Before the awards commence, we listen to Natalie Moser, a multitalented cancer survivor, tell the story of her ordeal. Her talk causes me to think how such accounts — beyond the inspirational message they convey — also remind us how horrible the disease and its treatment can be. Chemo is no guarantee of a cure by any means, but patients can count on its severe side effects in every case. The adverse effects of targeted treatments are common but vary by patient. Immuno-oncology drugs can also have terrible symptoms in some patients, though adverse effects are relatively mild in most. A truly new oncology paradigm would include a great leap forward in the safety and efficacy of cancer treatment. Safety and efficacy are, in fact, two sides of the same coin, and the current ascending notion that we can divorce one from the other is patently absurd, which of course does not mean it won’t happen.

Following Moser’s talk, the award presentations begin, and I become absorbed in the context and significance of each recipient’s achievement. In every case, the presentations stimulate more thoughts about biopharma and its role in society.

In an interesting turn, the first Pantheon award on the program goes to an industry outsider. Elizabeth Schar, a marketing professional, swung into action when she learned the local schools in her hometown, Ravenswood, CA, had no science labs due to budget cuts. She founded the Ravenswood Science Initiative and approached local biopharma companies for help. She struck pay dirt with Oncomed, whose CEO Paul Hastings presents her with the Biotechnology Educator Award. Answering Schar’s appeal, Oncomed donated used equipment and volunteer labor to build lab modules for the schools and train the teachers and students how to use them.

Again, emotional inspiration and stark awareness mix in this tale of public-school privation. Have other study areas suffered as well? Science is no island; cutbacks in STEM (science, technology, engineering and mathematics) programs only reflect public education’s diminished emphasis on the humanities, which normally drive the kind of curiosity that fuels scientific endeavors. The fact that a marketer, not a scientist, recognized the problem with the missing labs, underlines the multidisciplinary nature of this challenge. Industry obviously has a stake in science education, but to ensure a fully competent workforce in the future, it may need to focus more broadly on the state of education in general.

The next Pantheon award is for the “Rising Star,” which goes to PaxVax, one of our past Companies to Watch (Life Science Leader, January 2015). PaxVax openly declares itself a “socially responsible” company that develops affordable vaccines for neglected but widespread diseases such as cholera, typhoid, and now Zika. The company’s CEO, Nima Farzan, recalls how Dr. John Snow convinced authorities to remove the handle from the Broad Street pump that spread cholera through London’s Soho neighborhood in 1854 — a heroic act that ended the epidemic. It also ended and prevented many others, because it proved cholera traveled in sewage-laced water. Farzan brings us back to the present, and close to home, in citing the latest hurricane-spawned cholera outbreak in Haiti.

Vaccines serve as another example of the industry’s general-versus-specific interests; a broad education imparts skills in critical thinking and the ability to distinguish between “fake news” and reliable facts about vaccination. It also fosters trust and confidence in the civilized pathways by which vaccines become available, from science to business. It is a case of industry’s specific interest in the study area of science, and general interest in education as a civilizing force.

I see the same theme play out among all of the other award recipients as the evening progresses. Perhaps the most distinct expression of the idea was the simple invitation by Scott Morrison, an industry investment veteran and cowinner of the Life Science Leadership Award. Morrison invited the youngest people in the audience to build their careers in the biopharma industry, “regardless of your background.” He also noted the subtle pattern of nonscientists among the Pantheon recipients: a marketer for the Educator award; an accountant (Morrison), for Leadership; and another marketer, Allegan’s former head, David Pyott, also for Leadership.

All of the recipients gave thanks to people in many different walks of life who play key roles in the industry’s success — business people, regulators, clinical trial subjects, and in one case, even reimbursement gatekeepers. Chairman and CEO Michael Mussallem of Edwards Lifesciences, winner of Outstanding Product, Medical Device/Diagnostic for its advanced heart valve, said payers were typically “slow” in evaluating the new product, but serious and committed to the best care for patients. President and CEO John Orwin of Outstanding Company winner Relypsa credited the FDA as being “crucial to the success” of its first product,  Veltassa (patiromer), for treating hyperkalemia (high potassium levels). Orwin included the agency officials among the “heroes” who guided the product through development.

Williams of Five Prime shared credit with his company’s long-time partner, BMS, for helping it earn the Outstanding Partnering award. Williams brought most of his management team on stage with him to accept the award and honored a long list of scientists inside and outside the company for opening new doors in understanding and unleashing the immune system’s mechanisms for fighting cancer.

Acadia Pharmaceuticals received the Outstanding Product, Therapeutic award, for its anti-psychosis drug Nuplazid (pimavanserin), specifically for treating hallucinations and delusions related to Parkinson’s disease. Having watched my mother’s mental as well as physical self change as her Parkinson’s progressed, I am happy to see progress now in addressing the psychological side of the disease.

Following Morrison at the end of the ceremony, David Pyott received a litany of testimonials via video from a long line of friends and colleagues for his management of Allergan through an incredible period of growth. In the decade-and-a-half he led the company, it grew from about a $1-billion to an almost $70-billion business. The most fervent praise came for Pyott’s calm guidance through the attempted hostile takeover of Allergan by Valeant and its subsequent sale to “white knight” Actavis. In a symbolic victory for Pyott and his organization, Actavis then changed its name to Allergan. Pyott has also been a long-time leader of CLSA and its root organization, the CHI.

Thus the evening comes full circle to the host of the Pantheon Awards, and my host as well, to which I give many thanks for this educational pleasure. It’s too late to fly home, so I head out the next morning. On the way home, for no other reason than “because it’s there,” I photograph the snow-covered Mt. Shasta volcano and its immense lava field from the air. Another California miracle, and by legend a bringer of light to the great wild west.