SNAPSHOT
Cempra is one of a rare but expanding breed of companies answering the call for new antibiotics. Its two lead products, solithromycin (CEM-101) and Taksta (CEM-102/sodium fusidate), go at the challenge of antibiotic-resistant bacteria in two different ways — with a novel drug in the first case and with a novel form of an old drug in the second. Solithromycin is a new-generation macrolide and “the first fluoroketolide,” which is active against macrolide-resistant bacteria and more active than azithromycin or clarithromycin against most macrolide-susceptible bacteria, according to the company. The novel compound (in oral form) is in a global Phase 3 clinical trial in patients with community-acquired bacterial pneumonia (CABP). Taksta is an older antistaph drug, active against MRSA, recast into a “loading dose formulation” designed to “maximize efficacy and bacterial coverage while minimizing resistance development.”

WHAT’S AT STAKE
Depending on your definition of “novel,” a few other companies may be considered more innovative than Cempra for inventing entirely unprecedented classes and MOAs (mechanism of actions), which are also oft-disputed terms. But novelty is as novelty does. New treatments that actually work to cure patients, while defeating or slowing microbial resistance, will ultimately define the term. If Cempra succeeds where others fail, its practical blend of NCE and dosage-form development will deserve credit.

According to Cempra Founder, President, and CEO Prabhavathi Fernandes, the climate for new antibiotic development continues to improve. “Although many large pharmaceutical companies have exited the antibiotic space, other commercial- stage companies, such as Forest Laboratories, Cubist, and Astellas, continue to invest. But antibiotic development, particularly for targeted indications, is more feasible for small companies than is drug development for major chronic diseases.” Because the needed studies are of relatively short duration — cures usually occur within two weeks — the overall cost of the clinical trials is much lower compared to those for oncology drugs or other drug candidates that take longer to reach clinical endpoints, she explains. “Finally, it is feasible for small companies to commercialize their antibiotics if the hospital rather than the community is the point of sale.”

Governments have also given the sector a shot in the arm. Public and public/private initiatives in Europe, followed by the GAIN (Generating Antibiotic Incentives Now) Act and new-guidance drafting by the FDA, have boosted financial incentives and are clearing the path for new antibiotics aimed at resistant bacteria.

“We are very focused on developing differentiated antibiotics with the right spectrum that are effective against the pathogens causing a disease, including against drug-resistant strains,” says Fernandes. “Solithromycin has the right spectrum of activity for CABP because it is active against common CABP pathogens, such as Streptococcus pneumoniae, as well as atypical pathogens such as Legionella.” Its wide spectrum may allow its use as monotherapy, and its availability in oral and intravenous forms can allow earlier patient release. 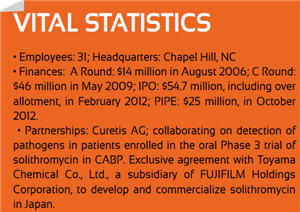 If you’re looking for the next blockbuster, a wise place might be the antibiotics sector. Fernandes points out the precedent set by former blockbuster antibiotics — such as azithromycin, clarythromycin, and ciprofloxacin — that met not only the safety and efficacy criteria, but also covered the right spectrum for their indications. Another attractive advantage of antibiotics: When they work, they cure. Unlike antineoplastics and other prophylactic drugs, the clinical results for antibiotics are always clear and unambiguous.