Life sciences observers continue to spot a trend that comes more into focus every year: Big Pharma is reducing investment in its own R&D, yet investment in early-stage venture-funded companies seems to be growing. Big Pharma recognizes that there is a lot of good science going on outside their own walls, and rather than try to start up their own internal programs in all of the spaces they are strategically interested in, it sometimes makes sense to fund those programs externally (for a while) to see how they evolve before, possibly, pursuing an acquisition. This begs the question: Who is funding the future of life science innovation?

According to the MoneyTree Report from PricewaterhouseCoopers (PwC) and the National Venture Capital Association (NVCA), traditional VC firms invested $2 billion in 172 life sciences deals in the fourth quarter of 2015, compared with $2.8 billion in 202 deals during the same quarter of 2014. With $10.1 billion invested in 783 deals for the full year 2015, the life sciences industry was the second-most-invested destination after software, in terms of dollars.

But, Big Pharma’s long-term health depends on developing new breakthrough drugs, and three routes to achieving this include in-house R&D, acquiring or inlicensing promising pipeline drugs from other companies, and investing in promising new companies with the hope of acquiring them later. Thus, Big Pharma has stepped in to support early-stage companies alongside their VC counterparts.

Moderna Therapeutics is a prime example. The Cambridge, MA-based company raised $450 million from high-profile partners including Alexion Pharmaceuticals and AstraZeneca in the largest private fundraising round for any biotechnology company on record, according to Forbes. The company is developing a novel approach to medicine that leverages messenger RNA to treat cardiovascular, metabolic, and rare diseases. 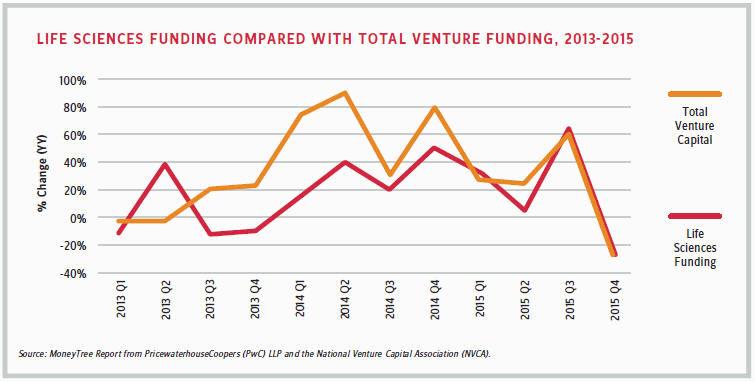 The leading corporate venture investors in the industry include Novo Nordisk; Novartis; Pfizer; S.R. One (GlaxoSmithKline’s independent corporate healthcare venture capital fund); and Johnson & Johnson Innovation-JJDC, Inc (JJDC), previously called Johnson & Johnson Development Corp. In fact, from 2014 to 2015, JJDC was one of the most active VC investors among pharma corporations, investing hundreds of millions of dollars.

"This strategy is atypical, but creating new companies can result in new platforms for us in the future."

Since March 2000, JJDC has made hundreds of investments in hundreds of companies. JJDC is not unique among corporate VCs in that it is a venture group, but, unlike the others, it is not a financial investor, explains Tom Heyman, president of JJDC and CEO of Janssen Pharmaceutica NV in Belgium. “Many pharmaceutical companies have created venture capital groups, but we are primarily strategic investors, investing in the companies that have tools, technologies, and products that might be of strategic interest to our sectors today or in the future. For us, everything we do has to be a financially sound decision, but it’s about strategy first and all else follows,” he says.

INVESTMENTS SUPPORT KEY SECTORS
The majority of JJDC’s investments have been of interest to specific J&J business units (medical devices, pharma, and consumer products), and most of its investment dollars have funded such deals.

The JJDC group has only nine active investors. Two years ago, four regional innovation centers were formed by J&J, and the majority of the investors were moved to those regions: Menlo Park, Boston, London, and Shanghai. “These innovation centers ensure we are close to where the innovation in our areas of interest is happening,” says Heyman.

Together with the innovation center teams and representatives from its business units (e.g., pharmaceutical, consumer, medical device), JJDC investors identify market trends and companies pursuant to the corporation’s strategic goals. For example, two years ago, J&J and JJDC decided to enter the microbiome space. The team suggested a company called Vedanta Biosciences.

“We believed Vedanta Biosciences had an interesting science to start our path forward in the microbiome space,” says Heyman. Since that time, Vedanta has moved into JLABS in Boston, part of J&J’s biotech incubator network. Through JLABS’ facilities and satellite locations, companies gain access to move-inready modular lab and office space, allowing them to pay for only the space they need and expand quickly when they are ready.

Another example of JJDC’s investor insight is related to a European-based oncology company called Genmab, which was developing a promising treatment for multiple myeloma. “We were in discussions with Genmab for a licensing deal, but it was also important to them that we would make an equity investment as part of the collaboration,” explains Heyman. “We used equity as a tool to bring in the licensing deal.” That product was approved late last year.

Genmab received an up-front license fee of $55 million, and JJDC invested approximately $80 million for 5.4 million shares of Genmab. The total potential agreement value, including up-front payment, equity investment, and milestones, is in excess of $1.1 billion. Janssen was responsible for the costs of the ongoing development of the asset, which is now approved for use in multiple myeloma patients and is on the market in the U.S.

In seeking breakthrough technologies, JJDC has made a number of new medical device investments in the past year, including a Series A investment in Cala Health. Renee Ryan, VP of investments at JJDC, who works out of J&J’s Innovation Center in Menlo Park, said the company was of particular interest to J&J because it is developing a therapeutic wearable device for patients with movement disorders based on technology developed at Stanford University.

As a complement to its four regional innovation centers and its JLABS incubators in North America, J&J has just launched JLINX, an incubator initiative to support early-stage European companies to pursue research. JLINX, a collaboration with Janssen Pharmaceutica NV, will offer scientists and entrepreneurs access to venture funding from JJDC, R&D expertise, and state-of-the-art facilities. “JLINX fits in Johnson & Johnson’s overall external innovation strategy and fits with JJDC’s strategy as well,” says Heyman.

VALUE-ADDED INVESTING
No matter what the investment, there obviously needs to be a value to both sides. “In the end, the company should be one that we want to bring on board, either as a corporation or through a strategic transaction,” says Heyman. “That is how we create value for J&J. It’s not necessarily the equity investment that creates value, it’s the onboarding of an asset that creates value because it will add to the pipeline we have in our medical device, consumer, or pharmaceutical groups.”

JJDC also brings value to the company in which it is investing by helping address issues related to R&D or commercialization. “If we help solve their problems, we have a better chance of onboarding the asset down the road for J&J, and by doing that, we create value for J&J,” he says. “Sure, the financial part is important, but we are happier if the investment creates a situation where the company or asset becomes part of J&J or we obtain a licensing deal or form a collaboration.”

Strategic onboarding is an important part of JJDC’s strategy, and while the exact frequency varies, about every 18 months or so, one of JJDC’s portfolio companies gets onboarded by J&J. “This can get tricky, because we are often invested in companies that have multiple programs being developed in parallel, but we may want to onboard only one of those assets,” says Ryan. “In those instances, we in-license the one program into our pipeline, and JJDC remains an investor since we still hold equity in that company.”

Heyman adds, “To me, if we want to make equity investments, the end goal is onboarding the company. While lots of things can happen along the way to a company that might prevent that, such as technology or clinical failures, I define success as onboarding a company. We work closely with our sector teams on the decision to onboard or not, but ultimately the decision is theirs.”

Going forward, Heyman wants JJDC to be more proactive when using equity to create new companies based on technology J&J has acquired or has in house. “This strategy is atypical, but creating new companies can result in new platforms for us in the future, and we need to take a long-term view with respect to company creation.”