Focusing on a single treatment complication, this start-up is developing a drug to prevent dialysis access failure.

SNAPSHOT
Proteon Therapeutics has the singular purpose of treating the bane of nearly all kidney dialysis patients — stenosis and failure of the surgically placed vascular access for hemodialysis. Access failure leads to thrombosis and surgical interventions to restore blood flow, such as thrombectomy, angioplasty, and often creation of a new access. Proteon’s PRT-201, a “locally-acting recombinant human elastase” is applied to the external surface of the artery and vein during the surgical procedure. Having completed a Phase 2 trial and with FDA orphan and fast-track status, the drug is intended to reduce tissue growth inside vessels that causes poor blood flow, thrombosis, and vascular access failure.

WHAT’S AT STAKE
For this company, everything rides on a single strategy — treat serious, health-degrading, and often life-threatening ancillary conditions in patients with chronic kidney disease on hemodialysis. I picked the company this month chiefly because it highlights a little-discussed fact concerning morbidity and mortality — people frequently suffer and perish, not from the main disease that afflicts them, but of secondary effects of their disease state. Many cancer patients die of pneumonia; diabetes patients, of heart disease; quadriplegics, of pressure sores. In dialysis, the culprit can be a side effect of the treatment itself, for it requires a surgical alteration to large veins and arteries to allow access and exchange of blood with the dialysis machine. Starting immediately after the access is created, a rapid build-up of vascular scar-tissue frequently strangles blood flow and eventually renders the access unusable.

Proteon’s central asset is the IP for an invention made at Johns Hopkins University by Nicholas Franano, M.D., who founded the company and still sits on the board as “a spiritual source of energy,” according to its president and CEO, Timothy Noyes. Its rDNA-produced enzyme is designed to improve “vascular access outcomes,” he says. “When a vascular access site fails, you can no longer get dialysis, which is sustaining your life. Unfortunately, more than 50 percent of patients will experience failure of their vascular access sites in the first year post-surgery.”

The cause of access failure is typically stenosis and restenosis, actually an aggressive healing response in the affected blood vessels known as neointimal hyperplasia. Kidney-disease patients are already uremic, so neointimal hyperplasia will rapidly narrow the vessels to the point where access is no longer usable. “So a patient comes in for dialysis, but the fistula has failed because it’s either clotted or narrowed, and the patient goes off to get a balloon angioplasty. But this is someone who’s typically 65 or older, has heart failure, diabetes, hypertension, tremendous GI upset, takes about 20 medications on average, is disabled and infirmed, and is already feeling terrible from all the toxin build-up. The fear and the frustration are immense.”

The company’s recombinant enzyme is applied directly to the access point during the surgical procedure, and so far it appears to dramatically slow the vessel’s blockage. Results of its Phase 2 trial showed about a 50-percent reduction in the access failure rate among treated patients. That could translate into a reduction of nearly one full intervention per patient per year, according to Noyes. 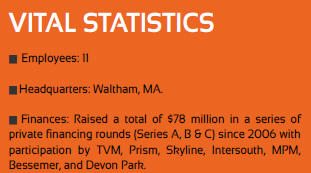 Hinting at further development and expansion of the company’s mission, Proteon is mid-way through enrollment of a Phase 1 study of patients with peripheral artery disease (PAD). For the vascular access indication, the company pins many of its hopes on the product’s fast-track, accelerated approval status and what Noyes calls, “the real consensus formed in the past 10 years in the dialysis community that, based on overwhelming data, performance of the vascular access is directly related to a dialysis patient’s quality and length of life.”