The Mechanics Of Hyperbole 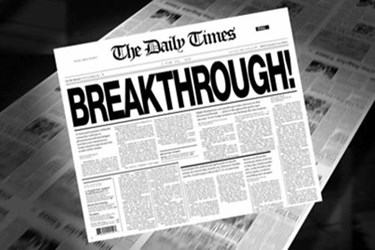 New, shiny toys grab the toddler’s attention. Oh, the possibilities of play — free imagination and magical thinking paint visions of miraculous action in a tiny, known corner of the endlessly mysterious world. Remember the time fondly, as the proper realm of a child, but whenever it surfaces in the adult world, beware. You don’t have to travel far to find it; just take a look at cancer. Not that oncology is the only therapeutic area subject to the hyperbole of hope. It is just the most perfect example of hype, an all-too-common state of mind in the “cancer community.”

Aside from the fixation on new discoveries, you can recognize the hype-fueled consciousness by its habitual skepticism toward any new approach actually reaching a stage of judgeable evidence. The mindset is always married to an uncritical credulity toward “promising” developments fresh from the bench — when their ultimate tests lay far into the future. “New Approach Could Stop Cancer in Its Tracks” or, even worse, “New Approach Stops Cancer in Its Tracks” reads the typical headline. If the writer can fit in any variants of the words “hope” or “miracle,” it shall be done. Often the subhead goes further than the headline, stating something like, “The revolutionary technique overcomes disadvantages of current treatments.”

How could they say that if it isn’t true? Wow, this War on Cancer is finally turning a corner. We’re going to win!

No matter the cancer killed was lying in a petri dish, or maybe stuck to a mouse. Hardly a thought to the decades of development ahead, assuming the new “approach” yields a therapeutic agent that survives all stages of preclinical and clinical development. I am always struck by how the reporting around such early experiments relies on the old journalistic trick of making you think something great has already happened, when nothing really has or will for a long time to come — except, of course, for the most likely outcome in all cases and at all times, failure.

My apologies in advance to the companies I’m about to offend, but I will now use some of their products to illustrate just how powerful this delusionary mechanism can be. My observations concern molecular-pathway targeted therapies for cancer. Almost as soon as scientists discovered the existence of proteins, enzymes, pathways, and mutations that help tumors grow, the headlines sprang forth, declaring imminent victory over the disease lay just around the corner. In fact, however, the wheels of R&D ground typically slow.

The roots of targeted therapy reach back to the 1970s, when “hope” in this new way of attacking cancer first arose. Thereafter, every time a new target was discovered and given its own label or acronym, the hopeful, hype-full headlines proclaimed it. The habit of unbridled enthusiasm for targets with only preclinical plausibility became firmly established in the War on Cancer, possibly from that point on.

Herceptin (trastuzumab) was the first to clear market entry for the targeted cancer drugs; it launched in 1998. Its target is the HER2 (human epidermal growth factor receptor 2) gene, where it is overexpressed and drives an aggressive form of the disease in about 30 percent of women with breast cancer. Actually, it’s much more complicated than that — involving a multi-step pathway of protein agonists, inhibitors, and catalysts — but the end result is that a biomarker test can identify women who have HER2-positive metastatic breast cancer and qualify them for treatment. Notice that the patient selection has two main effects: 1) increasing the odds of treatment success, and 2) decreasing the potential patient population.

Herceptin launched years before another kind of targeted drug, the VEGF-inhibitor Avastin (bevacizumab), won its first regulatory approval, for treating metastatic colon cancer, in 2004. Avastin opened a new category in the targeted-drug class: anti-angiogenesis, or suppressing growth of the vasculature supplying blood to tumors.

The new class came out of the almost single-handed work of Dr. Judah Folkman, whom I interviewed a few months after Avastin launched. Folkman championed anti-angiogenesis for years in the face of much scientific opposition, but his methods were not always mechanistic at the molecular scale. He also used old-fashioned empiricism and drug screening to identify a host of compounds capable of inhibiting the manic proliferation of blood vessels that supply tumors. One of his empirical findings was that even common drugs such as statins could do the job — and possibly avoid development of drug resistance — if administered at low, continuous doses rather than bolus injection.

Like immunotherapy nowadays, anti-angiogenesis offered a big target with the potential for broad application in many types of cancer, really the opposite of personalized medicine, and it was extraordinarily safe compared to chemo. Reporters pulled out all of the stops touting the new approach. And why not? The public had waited decades for something better than the mythically heroic ordeal of chemotherapy, and this was something better, delivering real benefits to a broad swath of patients, and with much less suffering.

But Folkman was the living antithesis of hype. He wanted people to believe in anti-angiogenesis and apply it widely, yet I noticed he always laid out the arguments for and against his theory and discussed the evidence meticulously. He also showed a healthy respect for the seemingly infinite ability of cancer to find a way around any treatment. He was oblivious to the business strategies involved in commercial drug development, but he knew patients would never receive the benefit of his research unless he worked with companies, which he did with extraordinary patience and practicality.

Morbid angiogenesis happens outside cancer, as in the eye with macular degeneration, so Folkman’s efforts did bear commercial fruit in more than one area. At the same time, in cancer, he unwittingly spawned a trend toward the dissection of tumor anti-angiogenesis into mechanistic sub-categories based on unique pathways involving the tyrosine kinases that help produce VEGF and other angiogenic proteins. Out of the tyrosine kinase research came a host of “nibs” such as sorafenib (Nexavar).

Soon, other targeted therapies followed as researchers uncovered many more of the ways and means cancers use to promote their own growth. Most were “personalized” treatments, typically selecting patients based on unique biomarkers that characterized the targeted cancer type. Smaller and smaller patient subsets spawned a proliferation of newly defined, “niche” cancers, which then became the largest category of indications for orphan drugs in development. The orphan angle fired up the media even more, and for every niche indication, heartwarming stories about new treatments for previously underserved patients abounded. Of course, each new regulatory approval warranted a news report, but many and maybe most of the more emotional stories appeared long before that fateful point, often when the drug in question was still only a glimmer in the bench scientist’s test tube.

All of the targeted-drug approaches, so celebrated in their earliest stages and launched with high expectations, have since disappointed. The reason? If you’re in oncology, you already know. Almost universally, tumors rapidly develop resistance to the targeted drugs. And some of the drugs, especially the nibs, have their own horrendous side effects. The answer has been to keep pursuing new targets, and meanwhile, to combine drugs with different modalities. Often, the combination includes a conventional chemo agent, thereby rubbing out the safety advantage, if any, of the targeted drug. Few news stories herald those facts; they just don’t fit the heroic scenario of “fighting cancer,” which the more hyperbolic tales fuel. In old-fashioned press terms, the disappointing reality of targeted cancer drugs doesn’t get much ink.

Pause here for an important acknowledgement. The internet has made a home for a new generation of journalists who do not shy away from judging late-stage drug candidates. If people wish, they can wade into the often contentious and rough-spoken multi-logue that picks over every clinical trial and data release, pitting dead-certain skepticism on one end against persistent bullishness on the other. Stocks and venture capital play the central roles in this often-overwrought drama, and short-sellers get in the act, but the unbridled interchange is still a refreshing and sometimes valuable new forum available to the public, if only folks weren’t so busy reading about the latest hope for a medical miracle … someday. Now back to our regular programming.

As we move on from clinical disappointments, we see that another downer tale — full of juicy intrigue, jealousy, and conflict — does get plenty of ink. Namely, the drug pricing issue has shown a darker side of hyperbole by raining on the entire biopharma-funding parade.

Not to inform my industry readers of something they don’t already know, but to place an anchor on a known fact: Orphan indications come with goodies. First, a healthy exclusivity extension for the drug prolongs its possession of the market. Second, companies have felt free to charge “premier” prices for orphan drugs, and payers have felt obliged to pay them. In my time, I have seen the entire industry, once mainly based on big-market, primary-care blockbusters, turn largely to niche-indication and specialty-care products. Many of the niches are rare indications newly identified by the drug sponsor, as in cancer. Meanwhile, more than 6,000 rare diseases already known still have no treatment. Could it be because, in most cases, finding and developing the right drug just doesn’t pencil out because the projected market and margins are too small?

All goodies come to an end. Exclusivity extensions for the highest-cost products, though seemingly secure for now, have been under increasing fire. Payers at all levels — including patients who have more and more “skin in the game” — may succeed in their efforts to pull the prices down. In any case, the last cog in the mechanics of hype may be the product of asymmetric success — reaping big rewards even while falling far short of your original goals. Something truly better comes along, say, immuno-oncology, revealing just how short you’ve fallen. But it doesn’t matter to the hype writers, unless they’re in your company, because they started losing interest in your product as soon as it exited the fantasy-filled land of science and entered the real world of the market. They are now busy hyping the next “miracle” hot off the bench.

Clear back in college, in my first writing class, we had an assignment for an essay on advertising. All of us ended up talking about the various ways ads can deceive and underhandedly influence people to buy things, but only one student (not me) went further. “People want to be deceived by advertising,” he said. “They enjoy the fantasy of obtaining wonderful things, even knowing full well it’s a lie.”

It is also true that the more fantastic the promise, and the further it is from a definitive true-or-false test, the more we are attracted to it. This is the hidden power of hyperbole. We like to be hyped, and even better, hyper-hyped. So I say, enjoy the hyperbole while you can — just don’t let your life depend on it. If you’re a cancer patient, you could get stuck in the gears.

When in doubt about whether it’s hype or not hype, I find the only real solution is to go back to the science — not just the data, or even theory, but the attitude. Science without emotion, but with openness to revealed truth, however much it may disappoint expectations, anchors us in a reliable reality, where everything that happens obeys natural, physical laws. Think the eclipse was over-hyped and boring? Too slow for entertainment, perhaps, but not to the scientists who studied it or the lay people who surrendered to the minute-hand crawl and were rewarded by observing the tiny, wonderful details — such as the orange curlicues around the sun’s edge or the moon’s mountains in highlight. Matching speeds with the celestial clock, the human being perceives the infinite. And that’s not hyperbole!