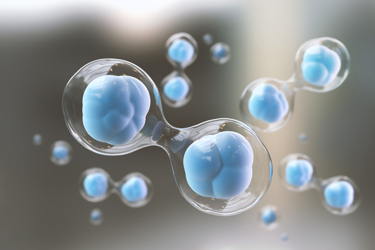 As Celularity makes its most significant clinical progress to date, the company is putting theories born of 20 years of postpartum placental stem cell research into practice. Could the production platform it’s building be the key to accessible, affordable allogeneic cell therapy?

These designations mark important milestones for the company as it progresses with a unique business model: deriving therapeutic biologic medicine from human postpartum placental material that would have otherwise been discarded as medical waste.

CYNK-001 is a non-genetically modified natural killer (NK) cell therapy developed from cryopreserved human placental hematopoietic stem cells. Celularity is currently engaged in a phase 1 clinical trial of the therapy for the treatment of patients with glioblastoma multiforme, a fast-growing brain or spinal cord tumor that’s the most common form of malignant glioma, and almost always fatal. The candidate is one of four postpartum placental-derived allogeneic cell therapies in the company’s clinical pipeline, aimed at hematologic malignancies, solid tumors, and degenerative diseases.

A Unique Approach To Harvesting Cells

Dr. Hariri’s company spun out of Celgene in 2017, though its roots trace back to 2001, where in its infancy it served Celgene as a drug discovery and development organization focused on cellular therapeutics. “That’s where we identified opportunities to bring clinical candidates in the form of stem, progenitor, and mature immune cells into the clinic, prompting us to pursue a clinical development strategy,” he says.

While many cellular therapeutics companies harvest cells from peripheral blood and adult tissues such as bone marrow, Celularity’s approach is different. The company harvests stem cells from healthy post-partum placental material. That’s a key, early differentiator in its effort to produce cell therapies more efficiently and safely, and ultimately, make them more accessible and affordable.

“The obvious benefit of having a source of cells that is an abundantly available and obtainable without any risk to the donor is a very elegant feature of our technology,” says Dr. Hariri. He and his team have been procuring placentas from full-term, healthy pregnancies for more than 20 years. “The placenta is nature’s professional, universal donor tissue.”

The UN pegs the number of babies born every day across the globe at about 385,000. That’s 140 million per year, and the vast majority of the placental material each of those births produces is discarded as medical waste. Dr. Hariri says the cells procured from postpartum material produced by a single birth—including the placenta and umbilical cord—are abundant enough to produce thousands of cell therapy doses. The volume of the source is mindboggling, but the logistics involved in documenting the source and ensuring its purity, safety, and suitability for manufacturing are far from trivial.

Celularity has forged partnerships with birthing hospitals, obstetricians, and academic hospitals and collaborated with them to establish finely-tuned and rigorous operational procedures for collecting, handling, documenting, and shipping placental materials. That starts with enrollment of donors, which includes an informed consent agreement, a detailed health questionnaire, and much more. “Because we begin working with donors and their obstetricians well before the birth occurs, we’re able to create a very expansive historical dataset on the source of the cells we’re procuring,” Dr. Hariri explains.

Participating obstetric practices are equipped with procedural kits, which obstetricians use to package and transport collected postpartum placental materials using a controlled courier system. To qualify, those placentas must be 40 weeks gestational age, plus or minus two weeks. This ensures biological consistency of the cells—another differentiator in contrast with the high variability of cells sourced from adults. Once the placenta arrives at Celularity’s purpose-built, approximately 150,000 square foot facility in Florham Park NJ, it’s immediately processed using a profusion methodology to remove residual materials and circulatory blood. Stem and progenitor cells are then isolated from the organ through mechanical dissociation. “We can identify and isolate mature cells that are either marginated to the vascular wall of the organ, or immediately extra vascular, as well as hematopoietic stem cells, progenitor cells, T cells and other blood cells,” says Dr. Hariri. Those cells are then tested for quality and bioburden before making their way to a manufacturing process that’s dependent on cell type and therapeutic intent.

Why Placental Cells Are So Suited To Therapeutic Purposes

Placental cells have unique biological features and characteristics that make them particularly appealing for allogeneic therapeutic effect. For starters, they’re tolerated by an unmatched recipient. Dr. Hariri explains. “A mother contributes 50% of the DNA to the developing fetus, which produces its own placenta. The placenta’s fetal origin tissue is a 50/50 match to the mother,” he says. “You would expect some immunologic conflict between the two, but that does not occur. The maternal system completely tolerates the fetal system and its placenta without an immunological response.” That’s the case not just in “normal” pregnancies, it’s also the case in surrogate pregnancies, where the mother isn’t even related to the fetus or the placenta. “That unique immunotolerance is a fundamental property conserved in the products from this organ that we think is unprecedented and establishes this material as the ideal one-size-fits-all source material.”

The fact that the cells are coming from a newborn donor is also important. “They're incredibly young and uncorrupted by adult life on the outside of the womb, where cells are exposed to epigenetic, modifiers, mutagens, and various other agents that damage DNA,” says Dr. Hariri.  “The cells that come from a newborn are pristine. Through all the natural checkpoints involved in the development and birth of a healthy newborn, these cells have gone through nature's own quality control process.”

One of the properties associated with placental stem cells that make them so valuable is called “stemness.” That’s an indication of the stem cells’ versatility, or ability to differentiate into the mature tissue lineage of the human body. “Stemness represents a cell's ability to transcribe the entire accessible genome of the cell, and to mature into a specialized phenotype,” explains Dr. Hariri. “The steps from stem cell to mature cell involve a series of cell divisions through which each division undergoes some form of gene silencing. A neuron doesn’t access the entire genome for transcription. It selects that part of the genome that is relevant for that mature cell phenotype.” Once that determination is made by the cell, it’s referred to as “terminally differentiated,” meaning the synthetic repertoire of the cell—what it can become—is limited. Newborn stem cells that don’t yet exhibit these limitations, says Dr. Hariri, can produce every gene product that's encoded in the original genome. “It's shown to be a huge advantage to have enhanced stemness for both proliferative behavior in manufacturing and in-vivo expansion in the clinic. We’re learning that stemness is correlated with efficacy and long-term outcomes.”

A Platform For Cell Therapy Efficiencies

Among today’s cell therapy companies, “platform” is the word du jour. Dr. Hariri says Celularity’s take on being a “platform” company is differentiated by its discrete systems that eliminate limiting factors that burden so many other cell therapy companies. It has access to a proprietary source of raw materials, a custom-built means of transporting them, in-house research, discovery, and manufacturing resources working under one roof, and multiple discrete IP-protected products in its pipeline. “That scalability and control over the cost of procurement and manufacturing is incredibly important in this space, and it speaks to commercial capacity and efficiency down the road,” he says. “It’s relatively easy to isolate and expand cells and use them clinically. It’s a very different process to do it at scale, at high quality, and in a manner that’s economically palatable to the healthcare system.”

In processing, the efficiency attributes of the newborn postpartum placental cell source shine once again. Because they’re so young, these cells exhibit differentiation and expansion fidelity, or a high degree of proliferative potential, commonly expanding by a factor of 20,000 to 100,000 times their initial volume. “The placentas we source are generally 500 grams to a kilogram in size and contain billions of cells,” explains Dr. Hariri. “That’s a quantitative advantage. More starting material gives us a head start to control the economics or producing the products. From one donor, with a fixed cost of procurement of the raw material at a fixed cost of entry into manufacturing, we can produce hundreds of thousands of finished cells.” That’s a clear starting volume advantage over even the best expansion possibilities for an adult cell or an IPS (induced pluripotent stem cell). “The cost of the output is impacted by the cost of what it takes to put raw material into the manufacturing process,” says Dr. Hariri.

Of course, even the most efficient supply chains and manufacturing processes are moot points if the therapeutics they’re producing aren’t safe and effective. The coming 12- to 18-months will present Celularity with ample opportunity to demonstrate safety and efficacy data, as the company moves aggressively on its clinical studies. In the meantime, its pioneering approach to sourcing and manufacturing stem cells that were not long ago out of reach is contributing significantly to a much greater effort: addressing unmet medical needs with affordable, accessible cellular therapeutics.

Learn more about Celularity at www.celularity.com