The Rollercoaster Ride Of A Biotech CEO

“They never expected us to last past our first 12 months of funding.” That’s what Sam Cobb, managing director and CEO of Australian biotech AdAlta, recalls some of the original academic shareholders telling her years after the company had succeeded. It’s now been 12 years since Cobb started the company, which develops treatments for fibrotic (i.e., scarring) diseases and is listed on the Australian Securities Exchange (ASX). Since then, she says it’s been “a roller-coaster ride of personal growth” as she has navigated the vastly different terrains of the U.S. and Australian biotech markets, led the company through the global financial crisis (GFC), and managed multiple iterations of the company’s lead candidate as it advances to the clinic.

THE NEED TO PIVOT BASED ON CUSTOMER FEEDBACK

AdAlta started with three pieces of IP from an academic collaboration known as the Cooperative Research Centre for Diagnostics (the CRC), made up of multiple academic institutes and commercial parties in the field of developing novel diagnostic tests and technologies.

All three pieces of IP were based on using phage display with the following novel libraries:

The CRC partners invested 12 months' worth of funding to get AdAlta started, but the technology (i.e., the libraries) was still very early in development and untested. "For example, the i-body library had been designed but not validated and screened on one to two targets," Cobb explains. "So significant work — more than our funding would support — still needed to be done."

Initially, AdAlta focused on the technology that was more developed: the phage display library of peptides, with several lead candidates in the area of inflammation. Feedback provided by Big Pharma and other potential partners was that the peptide half-life could be a long-term issue, and the company would need to demonstrate clinical efficacy. But other partners were more interested in hearing about the shark antibody and i-body-based technologies that were far less-developed at the time. 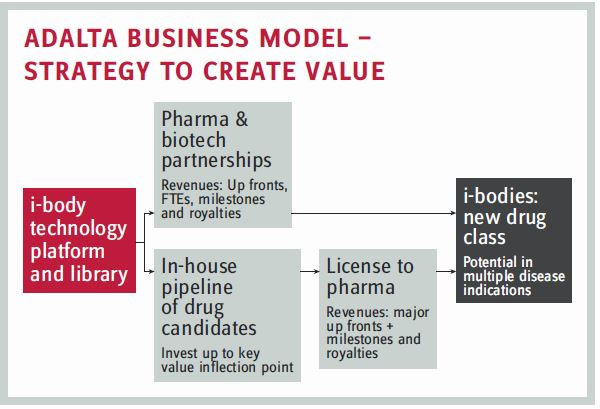 Based on this feedback and interest from Big Pharma, Cobb decided to pivot to the shark antibody-based technology. Funding was still a problem, though. “I presented to all types of investors, including venture capital, but again, the technology was very early-stage, so there was little interest.” That changed when she met Leon Serry, the founder of the first ASX-listed biotech company, Circadian. Serry invested as an angel investor, and his involvement eventually led to other high-net-worth (HNW) individuals as well as the BioAngels in SA (South Australia) joining this round of funding, which was enough for another year.

Further feedback from potential Big Pharma and biotech partners on possible immunogenicity risks with a foreign antibody-based technology pushed AdAlta’s focus to the i-body technology, the human version of the shark single-domain antibody. This outside interest spurred another round of angel investments that added another year of funding for the company. It was 2009, and Cobb had been CEO of AdAlta for only 18 months. 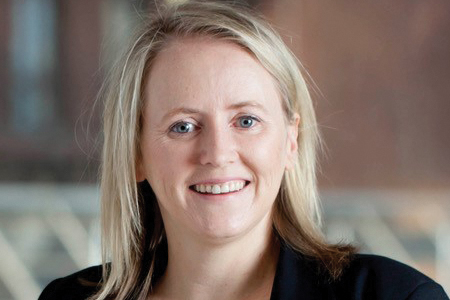 "We found ourselves again in Australia with limited private venture capital groups investing and a need to raise further capital."

At the time, AdAlta had two important deals in the works. The first, a licensing agreement with a Big Pharma, had started in July 2008. Since then AdAlta had been working toward meeting certain validation criteria and milestones. The second was an acquisition offer from a European biotech. Cobb had spent months working on the due diligence and getting agreements finalized with all 20 to 30 shareholders.

In the end, both deals fell apart.

The licensing agreement dissolved after the Big Pharma replaced AdAlta’s lead champion within the organization with a new head of biologics who indicated the company was changing its strategy. The acquisition offer became a victim of the GFC. The European biotech already had an AU office, which it had to shut down due to cost cutting related to the GFC. After that, the company couldn’t justify turning around and purchasing another AU company, even if there was a technology fit.

“Losing out on the acquisition was particularly difficult to swallow,” Cobb recalls. “We had final agreements in place ready for signature, so I hadn’t been spending a lot of time out raising capital. The company wouldn’t have needed any additional funding once the deal was finalized.”

Reflecting on this experience, she says it’s almost impossible for a single-person company to even contemplate licensing and acquisition deals while also trying to outsource all other functions related to internal programs. In fact, she says AdAlta’s internal programs suffered during this time because all resources were focused on meeting the validation criteria and milestones related to the Big Pharma deal instead of moving the company’s platform forward. “Both deals taught me that a deal is never done until the money is in your bank account — even if that deal is partially executed.”

FROM SOS MODE TO UNEXPECTED INVESTOR

At the collapse of the acquisition offer, AdAlta had only about three months of cash left in the bank. “We were in SOS mode,” Cobb says. Like just about every other industry during the GFC, the venture capital industry in Australia at the time was pretty depressing; just three Australian funds were investing in Australian biotech. Luckily though, a new VC group, Yuuwa Capital, had started in Australia, and Cobb knew some of the firm’s partners from when they had been running their own biotech. Yuuwa was interested in funding platform technologies, which at the time contrasted with most other investors who preferred single-product companies. “So, we had many things on our side,” Cobb says. “We knew the investors personally, there was synergy between their investment model and AdAlta’s platform business, and we had the due diligence materials ready to go from the acquisition deal, which made the due diligence process for investment swift.”

Yuuwa contributed U.S. $2 million in seed funding. With that money, and some additional convertible notes, AdAlta raised close to U.S. $7 million privately from 2010 to 2015. “The seed funding enabled us to identify a lead candidate with our i-body platform; however, we found ourselves again in Australia with limited private venture capital groups investing and a need to raise further capital.”

The company had garnered more interest after conducting multiple “road shows” in Australia and the U.S., but the private-funding route still was imposing. Several investors suggested an IPO would be the best bet, so AdAlta listed on the ASX in late 2016 with a preclinical asset. It raised U.S. $7 million in an oversubscribed offer and has since raised approximately U.S. $3.5 million, which will progress the company’s lead i-body platform through manufacturing and to the end of preclinical development. “Although the private equity capital markets are currently better in Australia than they were 10 years ago, raising capital is never easy, and it always takes longer than you think,” comments Cobb.

The company’s current valuation is approximately U. S. $20 million, considerably less than comparable companies based in the U.S. or Europe. Cobb says this is probably due to both the quantum of capital raised in Australia as well as the stage of development of the opportunity. Significant capital for AdAlta earlier on would have allowed Cobb to build a team and reach milestones earlier. (The company currently employs eight people and outsources several key activities, including manufacturing and preclinical studies.) “The U.S. investment environment enables companies to build quickly, meet milestones, and fail or progress faster. This environment is missing in Australia, and we are still talking about a valley — maybe a Grand Canyon — of death, with the lack of capital to take companies through to meaningful clinical-efficacy milestones and the need to list earlier than U.S. counterparts,” she says.

ALWAYS COMMUNICATE, NOT JUST WHEN YOU NEED MONEY

As any CEO who has endured the journey from private to public company will attest, the biggest change you immediately notice pertains to communication. Outreach to investors and shareholders becomes more involved — and more frequent. Cobb, a self-proclaimed fan of “the business of science,” never thought she would be the CEO of an ASX-listed company, but is comfortable with this new emphasis on communication. Nevertheless, she has enlisted the help of several advisors and an investor relations firm.

“It’s imperative to communicate the highs and lows of a company’s journey,” she says. “Our investors always tell us that they know where they stand, and that they appreciate that the company communicates what it’s up to, not just its need for funding. Frankly, I am humbled by the patience of our investors; some of them have been with us since the beginning and are still investing in rounds to this day.”

Sam Cobb has had a full plate the past 12 years, running — and growing — Australian biotech AdAlta as the company’s managing director and CEO. But since 2013, she also has become a mentor to other female biotech leaders as well as an outspoken advocate for a 50/50 split of female/male leaders in the life sciences industry. She’s done the latter via her involvement with Springboard Australia, a community- driven accelerator program for high-growth tech companies led by women, from which she graduated in 2013. Today, she is on Springboard’s executive committee.

Correia, whose company develops novel surgical devices that support existing and emerging minimally invasive surgery (MIS) techniques, says the team and program were very helpful in preparing Livac for the U.S. market and even more helpful in connecting the program participants with useful contacts both in Australia and in the U.S. “Springboard connected me to medical device entrepreneurs and investors who know and understand the medical device market and, more importantly, who have been successful in this market internationally. The mentors and connections made to date have been invaluable,” she says.

Professor Tang’s company is developing a novel combination probiotic allergen oral immunotherapy platform for the treatment of food allergies. She completed the Springboard biotech bootcamp program in Melbourne in 2018. “It was an incredibly enabling experience, providing me, as an academic physician scientist, with essential skills, insight, and knowledge to facilitate my transition into a startup,” she explains. “Sam Cobb was my lead mentor, who has provided ongoing support in the past year. One of the things that has been very helpful to me is the guidance I’ve received regarding how to deliver an investor/strategic partner pitch as compared to a scientific presentation.”