The Solar Eclipse And Other Irrelevancies 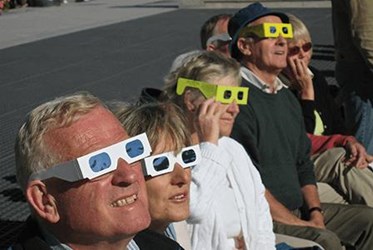 As a trade journalist, I often face the challenge of relevancy. Is what I’m writing about really useful and germane to readers as members of a particular industry? Over the past 30-some years, for me that has been the biopharma industry. In a business publication such as Life Science Leader, how much space do I need to give to science? Well, let’s pick an item obviously unrelated to biopharma and thereby test the observation — the upcoming solar eclipse. How could something so, uh, cosmic relate to the business of biopharma?

A few preliminary qualifications: The eclipse will be a mass event, meaning people will actually mass together along the route of totality, which passes just north of where I live in Oregon, after crossing the United States starting in South Carolina. (Some predictions have more than one million people coming to see the eclipse in Oregon.) Most of the pathway transects rural land, but people reportedly plan to converge on it from all distances and directions. Here, our state troopers are now preparing to deal with the inevitable traffic mess where the eclipse will intersect Interstate-5 and folks spontaneously stop and get out of their cars to watch a natural spectacle dwarfing all mere human-scale activities. We, the ants on the hill, can only look up in awe.

Just for starters, every business person should feel some healthy humility, standing in the shadow of the moon before the sun. But anytime people gather en masse, public health also becomes an issue. Facilities are overrun, resources exhausted, responses slowed, microbes exchanged, medications missed… If you are developing a drug or other medical product, it always helps to know about the everyday lives of your patients and stakeholders, but it is also useful to see the same people in extraordinary circumstances. Try imagining how a patient might experience your product while stuck on the freeway with a huge crowd of eclipse gawkers. Then extrapolate to emergencies when the lights go out and the water stops running. Depending on their medical condition, would those patients need some special formulation, delivery, or other assistance to use the product safely and effectively in a situation of stress?

The image of a huge traffic jam should evoke another business-relevant line of thought. Does your product present any logistical challenges in manufacturing or distribution? What happens when something interrupts supply anywhere along the line from raw materials to finished product? Could the needed logistics in even normal circumstances challenge your entire business model?

Such questions lead to still another set: What is the medical practice setting for your product? Who would prescribe, administer, or otherwise control its use? What do patients need to know about it before treatment? Actually, you will begin to learn the answers in clinical development, when you start to recruit investigators and subjects into your human trials — especially in Phase 2 for drugs, moving beyond healthy volunteers into sick patients.

Okay, enough of the open reverie; let’s try a simple, fundamental analogy. In what ways does the solar eclipse share parallel conditions or principles with your biopharma business?

Let’s say you go out to raise money for your company — you have some explaining to do. People who have never seen the science behind your company’s approach will need to learn about it in the most effective and efficient way possible. When I interview CEOs, I often ask, “How much effort have you put into developing a brief, clear statement and description of your science and product in development?” I ask the question because I spent four years “on the other side,” directing communications and doing business development for a small cancer-drug company. For good examples of others facing the same communications challenge, take a look at all of the products and offerings springing up around the eclipse.

Don’t expect the potential eclipse gawkers to know why it is happening and how; you may be disappointed. People generally know astronomy about as well as they know geography. (“Can you point to France on a map? No?!”) In the simplest and shortest possible way, how would you state the reason and describe what is happening when that dark shadow crosses over the sun? Here is my “first draft” attempt:

“As our planet earth revolves once every 24 hours, it orbits around the sun once a year, and the moon orbits around the earth every 28 days. Periodically, the three bodies form a straight line so that the sun casts a full shadow of the moon on the earth, and the disk-shaped shadow appears to move in a curved path from east to west across the earth’s surface. In a total eclipse, when the shadow approaches a fixed point along the center of the path, viewed from the ground, it looks like the moon moves in front of the sun until the moon entirely blocks the sun’s bright disk, or photosphere. Although the moon is much smaller than the sun, it is also much closer to the earth and by coincidence, from our viewpoint, seems to cover the photosphere exactly to its edge. During a total eclipse, the dark moon glows a subtle red, surrounded by the bright crown of the sun’s outer atmosphere, the corona. In a partial eclipse, the viewer is on the path, but off-center, so the sun’s disk remains partly visible throughout the event.”

If the paragraph were a proposed lead-in for a company/product description, I would start by circulating it for review by the C-level executives, as well as key people at the VP and director levels who run core functions such as regulatory affairs. They would all mark up the statement and return it to me for revision and recirculation for another round of review. The process would end, for a time, when the statement was needed for a specific event, document, or press release. Then it would resume as the team members had new thoughts and wanted changes. Merely circulating the document for review would also trigger edits. This “company language” would be debated right down to specific adjectives, adverbs, and prepositions, and any explanatory passage would be judged for whether it said too much or too little. “Can we really say that, based on the evidence we have from Phase 2?” In the war between cautious cuts and added thoughts, however, additions would usually win the day. Once I received the draft back from all reviewers and revised it accordingly, it would likely be at least twice as long as the original.

By analogy, in the interest of safety, the CMO may have attached something like the following sentences at the end: “At the full extent of a total eclipse, with the sun completely covered, viewers can look with the naked eye; but in a partial eclipse, viewers must use effective eye protection at all times when looking toward the sun.” Someone else may want to correct or elaborate on my semi-poetic opening sentence, but another person may prefer to shorten or eliminate it entirely. Pretty much every phrase and sentence in the statement gets a similar workover. Thus, I would rewrite the statement, trying to address everyone’s concerns but truncated to something like the original length — and then begin another round of reviews. In the end, the statement may actually be much shorter and, admittedly, clearer:

“In a total eclipse, the sun, moon, and earth move into a straight line so that the sun casts a full shadow of the moon traveling along a path on the revolving earth’s surface. Looking up from a fixed point along the center of the path, the dark face of the moon appears to move in front of the sun until it entirely blocks the sun’s bright disk, or photosphere. During a total eclipse, the dark moon glows a subtle red, surrounded by the bright crown of the sun’s outer atmosphere, the corona. In a partial eclipse, viewed from anywhere but the center of the path, the sun’s disk remains partly visible throughout the event, so viewers must use effective eye protection at all times when looking toward the sun.”

Still, some will argue the edited statement leaves out too much vital information, such as the opportunity for viewers at the path’s center to look at the totality without eye protection. Some will even want to add detailed advice about protective equipment such as special eyewear. Over time, the “company language” will expand and contract like an off-and-on dieter.

Inside a real company made of real human beings, people will tend to take on opposite ends of an ongoing tug-and-pull, generally “closed” versus “open” regarding communications with the outside world. Typically, CEOs have to raise money and want the freest possible hand in what they can tell the money people. CSOs may support a more open policy as well because they are often the inventors and want to share their creations with the world. CMOs can be quite the opposite, acting more like disinterested advisors striving mainly to keep the company out of trouble on the legal and regulatory fronts, and thus wanting it to tell its story externally in only the most careful and qualified ways. Yet, however I describe them in stereotypical terms, executive teams and the personalities therein will vary as widely as their companies’ scientific origins, business models, or other fundamental components. And I haven’t even mentioned boards, yet.

As someone who has actually sat in the middle of a company team, essentially negotiating the language we would use externally, I only know that each side must cede something to the other — actually, many things. You can’t raise money to pay for development unless you explain the full potential of your product to investors. But you must constantly guard against crossing the line of liability by making claims you can’t support or have improperly represented as validated before all the data is in and the regulators have rendered a decision. One challenge is the disparity in viewpoints between those who stay at home to mind the store and those who go out to raise funds and develop business connections. The first group might prefer to labor in private, avoiding all risk of outside interference; the second group, knowing only investment or partnering will keep the company in operation, must have a compelling story to tell outsiders. Most of the insiders will likely be scientists and technicians; many or most of the outsiders, non-scientists and non-technicians.

There will be people who say we should have just kept quiet about the damn eclipse and avoided all the fuss and trouble. Others will rue lost opportunities for educating the “public” about the vast universe that surrounds us. Our final impression of the whole affair will largely hinge on how well officials prepared and how usefully the cognoscenti informed people about the astrophysical and terrestrial consequences of the eclipse beforehand. So, was the event itself relevant to this industry and readers of this blog? Perhaps it was just marvelously irrelevant, like so many things that enter our lives from outer space to inform everything we do with an endlessly unfolding perspective. Now we know the most irrelevant things can suddenly arrive out of nowhere to become instantly and unforgettably relevant to all who witness them.