Was It the Weather? — Why Biotech Came from California 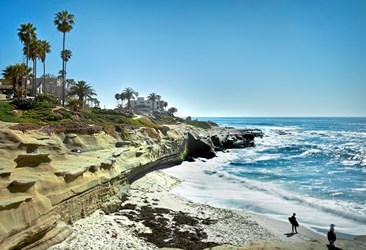 Could climate have played as big a role as science and capital in the origins of the biotechnology industry? No one, well, almost no one argues about where biotech was born — along the sunny shores of San Francisco Bay (Genentech) and Southern Cal, from LA (Amgen) to San Diego/La Jolla (Hybritech). Most often, and rightly so, the presence of an enlightened state university system, entrepreneurial academics, and some brave venture capitalists get the credit, but lately I’ve been wondering whether the weather deserves more recognition for its positive influence on the industry’s infancy. What, after all, can be more encouraging to the enterprising mind than a perpetual spring?

In the August issue of Life Science Leader, the second installment of our new series, Industry Explorers Blaze On, will appear, featuring biotech pioneer David Hale. One of Hale’s professional anecdotes is about his recruitment, from the comfortable office suites of a big pharma in New Jersey to the trailer-based headquarters of little Hybritech in Torrey Pines near San Diego. The recruiter’s winning hook was calling Hale from the beach and bragging about the lovely day there — sunny, 75 degrees (F), low humidity, pleasant breeze, and so on — knowing full well it was freezing outside Hale’s window at the same time. The kind of freedom a benign sun can confer upon you, so utterly comfortable yet simulating, a feeling all things are possible, the wonder of life and imagination…

This is not to say biotech cannot happen, or even thrive, in less commodious climates. Look at Boston — one could hardly imagine a more extreme contrast to the southern west coast than Bean Town, from its hyper-frigid winters to its ultra-sultry summers. Yet Boston now rivals the Bay Area as a biotech hub. But that is now, and I’m talking about then, when bio was but a babe in arms. The question is still about beginning: did this brand new industry need that extra push of a beneficent clime (aside from San Francisco’s wintry July) to overcome the unlikelihood of such a business ever being born? I think it quite likely did.

But I also know you can take these metaphors a bit too far. Biotech abounds with metaphors, or more accurately, stereotypes — wearing different hats, the personal touch, fleet-footed decision-making, flexible management, casual work styles, and so forth — and some of them happen to be true, sometimes. In fact, Hale’s whole “second career” on the west coast attests to the verity of bio’s entrepreneurial image. It’s just that you have to accept the lack of unanimity over small-company virtues.

For another upcoming article, today I spoke with Pfizer’s Geno Germano, who heads the company’s new Global Innovative Pharma Business. I asked Germano whether it is accurate to say, as many do, Big Pharma runs from the risk of innovation, leaving it to small companies to run toward it. You can read his full answer when the article comes out, but in short, he argues the notion is pure myth, saying big companies actually hold a “portfolio of risk,” or a range of assets that vary from low- to extremely high-risk candidates for product development.

Maybe there is something in the air of New Jersey and New York that favors innovation, after all. Try this: the color is green, but not the green of spring grass. Money talks in Big Pharma, especially after decades of pipeline-dry companies gobbling up and digesting pipeline-rich companies, then turning to the bio crowd for the next generation of new drugs. Steering into the headwinds of risk might be the best metaphor for the big companies now. I can believe it is imperative, if Big Pharma wants to talk about the value versus the price of new medicines, that the industry rebuild its core reputation for innovative research and development, and thus restore its credibility. Public perception on the issue of innovation will have a growing effect on the industry’s profits and cash flow.

As long as I’m revealing things I’ve been working on, here are a few more:

A “Year-Later” Update on Cancer Immunotherapy. Last year, in September, we began a five-part “virtual roundtable” on combination cancer immunotherapy, featuring almost a dozen of the top researchers and experts and two dozen companies in the immuno-oncology (IO) field. We will mark the series’ anniversary with a report on the progress of IO since the landmark studies on checkpoint inhibitors were released in mid-2014 — revisiting most of the experts, some of the companies, and some new participants in the continuing development and discussion of cancer immunotherapies.

New Therapeutic Pathways: Neurodegenerative Diseases. Similar to the IO phenomenon, researchers, key opinion leaders, and companies are now developing new drug therapies with novel mechanisms for the long moribund neurodegenerative-disease space — including Alzheimer’s, Parkinson’s, and MS. Modeled loosely on the Combination Cancer Immunotherapy series, this survey of KOLs and companies will explain the new MOAs, highlight the most exciting approaches, and evaluate the likely impact of new, novel, neurotherapeutics on companies and suppliers in the neurodegenerative disease area.

Companies to Watch. I won’t tell you what the next company in CtW will be — let’s just say I have “auditioned” a number of candidates at recent industry meetings — but I will take this opportunity to restate my description of the column: CtW spotlights a single company each month in a standard single-page format of Vital Statistics, Latest Updates, and a What’s At Stake section of analysis. The only criteria for CtW selection has been: 1) a small, entrepreneurial company developing its own products (not just a platform), 2) little or no press coverage to date, and 3) an interesting story involving useful business lessons. Companies are not selected on the basis of stock performance or potential, prediction of ultimate success, or analytical metrics. I emphasize up-to-date information, thus the selection is made and column drafted as late as possible in the production cycle for the next magazine issue. In 2014, we began the Annual CtW Round-Up, which described the progress of each company featured during the previous year. Stay tuned for a possible upgrade and expansion of Companies to Watch.

The Enterprisers. This is still a relatively new feature with its own format and “brand” for the front section. It delves deeper than Companies to Watch, looking at an especially innovative or entrepreneurial company, individual, or institution through our trademark editorial lens — lessons learned, actionable info, benchmarking, best practices, and so on. Example: A company and its management have worked through a business challenge or accomplished the exceptional in start-up, scale-up, and development, learned some lessons in the process, and is able to articulate them. I can also use the form to spotlight the head of a large-company division, therapeutic area, R&D, business unit, or development program — or any individual or group having made outstanding contributions to industry innovation.

Industry Explorers Blaze On. This is a series of interviews with senior executives who played a historical role in drug discovery and development and are still active in the biopharma industry. The first two examples: Dr. William Comer, the former head of R&D at BMS who led the development of the first HIV drug; and David Hale, the leader of Hybritech when it helped jump-start the biotech industry, followed by a string of successful companies since then. I am open to nominations and am currently most active in recruiting women into the series. (It’s not about a good-ol’-boy network.)

I end this blog with a comment about Comments. You may have noticed some months ago the addition of a Comments field at the bottom of most articles and columns published, like our blogs, in text form on our website. The purpose of the field is to involve our readers in the magazine by giving them a way to speak to our writers, editors, and publishers, and to their fellow readers. It is not intended as a sales medium, like a bulletin board for self-promotional messages. I encourage everyone who wishes to use Comments for its intended purpose to do so, and I just as actively encourage everyone who wants to use it for self promotion not to do so. Please, in fact, use Comments to join us in discussing the information and ideas presented in these pages.

And I wish everyone the best of weather!