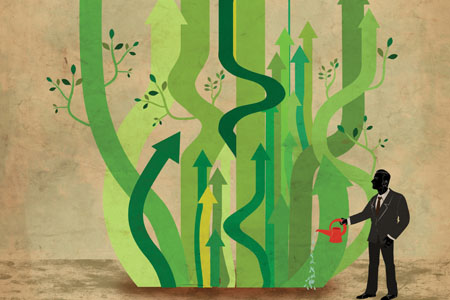 Virdante Pharmaceuticals of Cambridge, MA has officially made its industry debut with $47.75 million in its pocket. This privately held biopharmaceutical company is focused on the development and commercialization of drugs for autoimmune and inflammatory disorders. At the heart of these drugs is what Virdante founder, Jeffrey Ravetch, M.D., Ph.D., calls the “sialic switch.”

This proprietary technology is being used at Virdante to improve the anti-inflammatory properties of antibodies. Dr. Ravetch, a professor at The Rockefeller University and a member of both the National Academy of Sciences and the Institute of Medicine, discovered this anti-inflammatory biological pathway and founded Virdante to develop safer and more effective therapeutic antibodies. Virdante exclusively licensed the technology from The Rockefeller University and established a strategic research alliance with Dr. Ravetch’s laboratory to continue to explore the biology of the sialic switch technology.

With the science in place, Virdante needed a business person to translate its science into a commercial opportunity. John Ripple was contacted. Before starting Virdante in 2008 as CEO, Ripple was CEO of Syntonix Pharmaceuticals, where he led the company through a successful acquisition by Biogen Idec in 2007. His previous biopharmaceutical experience includes positions as VP of corporate development at Syntonix, assistant VP of global business development at Wyeth, and director of corporate development at Genetics Institute. His other business experience comprises medical device marketing and management consulting. Prior to attending business school, he was an aerospace engineer at NASA. Ripple received his bachelor’s degree in mechanical engineering from Bucknell University and an M.B.A. from Harvard Business School.

Life Science Leader magazine recently spoke with Ripple about how the company raised such an impressive amount of initial funding, the challenges a small biopharmaceutical faces, and how he expects the sialic switch to transform the delivery of antibody-based drugs.

Describe Virdante Pharmaceuticals’ Mission.
For the past 40 years, industry has intravenously administered plasma-derived intravenous immunoglobulin (IVIG). There are companies out there that collect the plasma and fractionate (separate and purify) the immunoglobulin that is then given to patients who cannot produce these antibodies on their own to fight infection. IVIG is useful for anti-inflammatory and autoimmune disorders. If the antibodies were given in large doses, these patients’ autoimmune disorders were found to dissipate. The IVIG binds to antigens and recruits the immune response.

Dr. Ravetch, our scientific founder, identified that there are billions of different antibodies in IVIG and that a small population of them are anti-inflammatory while the majority of them are pro-inflammatory. What makes the minority different is that they have sugar molecules, sialic acid, on the stem region.

Dr. Ravetch started Virdante based on the sialic switch — how an antibody makes the switch from a pro-inflammatory to an anti-inflammatory. We buy the IVIG on the market and perform a second manufacturing step to add the sialic acid back onto the purified IVIG, creating sIVIG. This increases the anti-inflammatory potency of the IVIG drug and reduces dosing tenfold. This is important because IVIG must be given to a patient suffering from autoimmune and anti-inflammatory disorders over a period of one to five days every month to ensure its potency. This requires going to a transfer center to receive the IV. By reducing administration time tenfold, we can free up chairs in the transfer center.

How Did Virdante Raise Such A Substantial Amount Of Funding ($47.75 Million)?
Many are impressed with how much money we raised in a Series A financing. They have to remember that this is a staged investment. We received $30 million to date, and the remainder will be received based upon our continued progress and by hitting certain corporate milestones. Reaching clinical proof-of-concept on our lead drug will help validate the sialic switch technology in humans and de-risks their investment.

Why Is Virdante Attractive To Investors?
IVIG is a $4 billion/year drug. Being able to provide improved therapy in this class of drug with a double-digit growth rate in autoimmune and anti-inflammatory disorders is very attractive. Also, many of the investors knew of Dr. Ravetch and were enthusiastic about starting a company with him as the founder. He is a serial entrepreneur, and he knew about a handful of the investors up front. These include Venrock; Clarus Ventures; Thomas, McNerney & Partners; MedImmune Ventures; Biogen Idec New Ventures; and Osage Partners.

Also, although we are an early-stage company, we have good clinical data. In the 1990s, clinical trials showed that the stem section of an antibody had similar benefits to the entire IVIG. While this isn’t ultimate proof, it is promising to show that the sialic switch is where anti-inflammatory properties come from. This “proof” makes our science less risky as a young company. Lower risk is important in the eyes of investors.

What Relationship Does Virdante Now Have With The Rockefeller University?
Dr. Ravetch continues his immunology research, and we have an exclusive relationship with him in this area of science. Virdante funds him and his lab, and any discoveries are then licensed to Virdante. He’s our research arm. We’re focused on developing drugs with IVIG to treat autoimmune and anti-inflammatory disorders.

Where Else Might sIVIG Have Applications?
Our clinical studies in animal disease models have proven the anti-inflammatory potency of the drug. By providing a drug similar to IVIG with lower doses, we think there are other indications for sIVIG where IVIG might not be the first line of therapy, such as lupus, rheumatoid arthritis (RA), and multiple sclerosis.

IVIG has a good safety profile and tends to be used for off-label indications, such as Chronic Inflammatory Demyelinating Polyneuropathy (CIDP), which is similar to MS but rather than attacking the central nerves in the brain, it attacks the peripheral nervous system such as the arms and legs. IVIG is first-line therapy for CIDP patients. They receive IVIG infusions on a monthly basis for the remainder of their lives. sIVIG has the potential to lower the dose tenfold, reducing the infusion time tenfold as well.

Finally, there is also the business opportunity that IVIG has for treating Alzheimer’s patients. Baxter is in a pivotal trial now to evaluate how appropriate IVIG would be for treating the disease. If appropriate, the plasma industry would need 5 to 10 times the current world supply of IVIG just to treat those patients. It would take a lot of years and a lot of money to collect and fractionate the plasma. With our sialic switch technology, we can take the current world supply of IVIG and treat 10 times more patients.

How Will Virdante Use The Financing?
Virdante plans to use the proceeds from the new financing to pursue development of a second drug, a sialylated recombinant Fc fragment (sFc). This involves taking the stem from the antibody and making it recombinantly (synthetically). Hemophiliacs don’t produce clotting Factor VIII (F8). Without F8, they will continue to bleed. In these cases, the F8 is separated from plasma and given to the patients.

In the early 1990s, I worked in business development at Genetics Institute, and we had received FDA approval for recombinant F8. I worked on some partnerships with plasma companies that were interested in commercializing GI’s recombinant Factor VIII and Factor IX products. Many hemophilia patients preferred to use these recombinant products, replacing their plasma-derived counterparts. After approval of the recombinant hemophilia factors, plasma-derived Factor VIII was no longer the most profitable product for plasma companies. IVIG became the “flagship” product. No one expected that a plasma-derived, polyclonal antibody product such as IVIG could be replaced by a recombinant product until Dr. Ravetch discovered IVIG’s anti-inflammatory mechanism of action.

Now Virdante is using Dr. Ravetch’s sialic switch to develop a recombinant antibody fragment that will compete with IVIG in some therapeutic indications, such as MS. Moreover, the sFc product will be optimized to increase its anti-inflammatory potency so it may provide an improved efficacy in indications which IVIG provides only minimal therapeutic benefit. sFc will be more potent than IVIG or sIVIG on a mass basis because Virdante is optimizing the drug to signal the novel anti-inflammatory pathway that Dr. Ravetch has discovered.

Describe The Virdante Business Model.
We are focused on development and proof-of-concept of our drug. Our near-term focus is to bring sIVIG to clinic and demonstrate the improved anti-inflammatory activity in humans. We can partner with other companies and will do so on a selective basis. For instance, once we demonstrate the activity of sIVIG, we will create a partnership program with a major plasma company to separate and fractionate the plasma.

In the case of sFc, which is a more traditional biopharmaceutical drug, we plan to develop it on our own. We may seek partners outside of North America, and the worldwide market potential for this drug is $1 billion or greater. Of course, its commercial viability will depend upon how it performs in clinical indications.

We might also partner with existing drug companies to help them develop improved versions of their drugs, such as in the case of the existing commercial RA products discussed earlier. Or, if there are competing companies out there developing biosimilar drugs, we might partner with them to develop bio-better drugs using our technology.

We also will remain focused on development rather than building infrastructure here. For example, we will develop the manufacturing process necessary for adding sialic acid to the stem region of an antibody, but will contract to a CMO to perform the GMP manufacturing. The CMO will make the clinical material and commercialize the drug rather than our developing a GMP facility with investor money.

The same holds true for preclinical studies. We do not perform any animal experiments here. The CRO runs the studies for us and will perform our proof-of-concept trials as well.