Biopharma's Reputation — Out Of The Frying Pan And Into The Fire 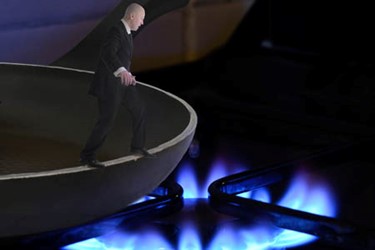 My career in life sciences began in 1993, and I vividly remember how it felt to have finally broken into the industry — elation and extreme pride. I had made it. You could almost imagine being at a social event and people whispering, “I hear he’s in pharma.” No kidding. That’s how it felt. Why? Well for starters, breaking into industry (at least for me) wasn’t easy, which I wrote about last year in What Can Be Done To Save Biopharma’s Broken Image.

The screening was rigorous and comprehensive, and seemed to take around six-months from the first phone call to the final offer. There was a physical, a drug test, and a comprehensive background and credit check. I recall having to provide a “Xerox” of my diploma. There were tests, and more tests. The hiring manager interviewed all of my references, some in person. So, when I finally got the offer, I felt like I had really accomplished something. This was reinforced in level 1 training in Evansville, IN, (location of MJN’s global HQ), as I remember them stressing how many resumes they receive for these coveted sales positions. Turnover at companies like MJN were low, and I was replacing someone who had held the position for 30 years and would be competing against two competitors having tenures of 17 and 10 years at their companies.

The training was serious and continuous throughout my career. How serious? We wore business suits during level 1 training classes, even on what was casual Friday for everyone in the home office. It was explained to us that this is because “medical sales representatives” were the face of the company to customers in the field, and we should always look professional when representing “our” company. There were presentations and tests on products, as well as the founder of the company, E. Mead Johnson, one of the lesser known brothers of Johnson & Johnson. We knew when and why he founded this company as a side business, and if memory serves, it was to create a digestive aid for his infant son. There were presentations on all the specialty formulas we made for babies with rare diseases, most of the costs of producing being covered by profits from our flagship and best-selling brands. And so, when people asked you what you did, you couldn’t help but smile and gush about all the incredible things companies like MJN were doing. We were saving babies, and there were days I couldn’t believe the company was paying me to do what I did for a living!

Our Industry’s Reputation — From Worse To Worst

I also remember the industry being one of the most respected in the world. Last week, Gallup released its annual ranking of 25 industries as perceived by the American people. The scores take into account positive, neutral, and negative perceptions held and comes up with a net-positive (or negative) score. For example, the restaurant industry had a 2019 total positive of 66, neutral of 25, and negative of 8, resulting in a net positive of +58 (66 – 8). The pharmaceutical industry had a -31 (27 positive and 58 negative)! MINUS THIRTY-ONE! More than half of Americans hold a negative perception of our industry. A reader sent me an email giving me a heads up on the Gallup poll and noting the silver lining being, “at least we can’t go any lower.” And when price controls happen, and biopharma innovation moves to China, we will have nobody to blame but ourselves.

I’ve been voicing my concerns over the industry’s poor job of managing its reputation for years. I even attempted to amplify this message after last year’s Gallup poll indicated the pharmaceutical industry (which in my opinion includes biopharma, biotech, cell and gene therapy, combination devices, pharma and precision medicine) was second to last, just above the Federal government, even conducting a roundtable to seek ideas and solutions during JPM 2019. But this year we’ve gone out of the frying pan and into the fire, and not even nonsensical Presidential tweets or the cavalcade of Democratic presidential hopefuls spewing idiocy could keep us from coming in dead last. And if you think it’s bad now, wait until both parties open up with both barrels on biopharma during the upcoming Presidential primaries and election.

It is time to get serious about managing our industry’s reputation, and I implore leaders of biopharmaceutical industry associations (e.g., ARM, BIO, PhRMA) and leaders of industry to begin discussions as to what can be done to fix this problem. We need to bring in outside stakeholders as a component of any initiative to make sure we are hearing their point of view. Let’s avoid the “few bad actors” BS, because we all know of a certain data situation involving a Big Pharma and one of industry’s rising CEO stars could easily be classified into such a category. The GO BOLDLY campaign was a good start, but it seems not nearly enough. No offense to the restaurant industry, because food is very important, but don’t you think the American people should have a much higher regard for companies bringing cures for health and life than those bringing us our food on a night out?

Fixing our industry’s image will require a grassroots effort. Maybe we should be producing videos of the stringent manufacturing and clinical trial processes employed by biopharma. Do you think the American people have any idea what all is involved in building a biopharmaceutical manufacturing facility or manufacturing pills, let alone biologics? Do they truly understand how difficult it is to get a drug approved? How can we show and tell them these things in short messages they will understand and believe in? How can we get them on our side? What new communications platforms should we being using to reach millennials? How can we provide a louder voice to those whose lives have been saved by our industry (i.e., raving fans) and get it to the masses? Should PhRMA consider reopening parts of its annual meeting to select outsiders (e.g., patient advocacy and press)? What can we do to get more advocates in Washington sooner rather than later? And what can we do that is different, because what we’ve been doing obviously hasn’t been working. But most importantly, ask yourself what you can do to start making a difference. Because the reality is that most of us have been doing nothing, and we can all see how well that’s been working out for us thus far.