Your Bio Company's Story: The Mechanics Of Clarity 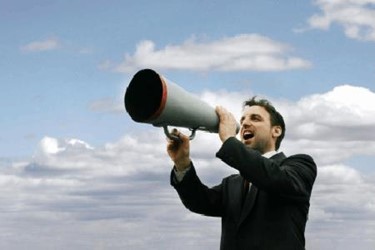 Talk about expectations. Someone recently tweeted that, nowadays if he receives an email with a thank you lacking an exclamation point, he assumes the sender is angry with him. Signaling — which is what we do through language of all kinds, in all media — may never communicate exactly what we mean to convey. Language is both the most powerful and least reliable form of communication.

In writing, punctuation is a tool for clarification but, as the above example shows, subject to distortion and ambiguity under ephemeral conditions. Even adding the synthetic facial expressions of actors and emoji fails to reproduce the dynamic feedback of live conversation. Talking face to face gives both sides the opportunity for continuous confirmation of each other’s intended meaning in real time. I’d like to think the Japanese poet Issa would have mastered Twitter as he did haiku, combining succinctness and ambiguity in brilliantly compelling ways. Unfortunately, we now see the clumsy, even dangerous results when crude and malevolent word wielders use the short-form medium to hurl insults at each other.

Hyperbole is not only misleading, it is destructive. If you load your tweets with incendiary slogans and name-calling, you destroy dialog. If you flash a sexy, emotion-laden headline promising more than your story delivers, you destroy trust. If you interpret preclinical test results as an immediate “promise” of treatment or equivocal clinical data as a cause for “right to use,” you destroy critical thought. I explored some of those concepts in a previous blog, “The Mechanics of Hyperbole.” Here, I aim to offer some additional ideas for how companies can best describe themselves and their products — and how PR agents, journalists, and others might describe them — by achieving the opposite of hype: clarity.

The word is almost pedestrian, I know. So normal. So mundane. Who in the world would be impressed by simple clarity of expression? How could a mere string of common words, placed carefully and plainly, possibly set the world on fire? You may be surprised.

In a world of hyperbole, the merely clear is king. “I will fight no more forever,” said Chief Joseph, to end his brief, unembellished speech marking the surrender of the Nez Perce. Those six prosaic words carry all of the weight, from the long struggle and flight of his people to their ultimate defeat. No superlatives, no emotional overstatements, no self-aggrandizement. It may look odd to use such a tragic occasion to illustrate this point, but I believe the example works well. If you can show such effective grace in portraying your worst moments, you will likely achieve equal eloquence in heralding your best ones.

An essential element of clarity is honesty. Add to that the sub-category of accuracy. Let’s start with the all-too-familiar case of a failed Phase 3 clinical trial. In a distant, scaled-down echo of the Nez Perce, the long, long trail of drug development often ends woefully in a pivotal registration trial that falls short of meeting its primary endpoints.

In cancer, the most common and expected endpoint of Phase 3 trials is overall survival (OS), usually defined as the percentage of patients still alive five years after randomization into treatment and placebo groups. Sounds simple, but the OS calculation can get more complicated or be delayed because it may require a very large population of trial participants, an accounting of crossover and therapeutic changes, and adjustments for those who die of causes other than cancer.

To make an earlier argument for some drugs, trial sponsors have turned to various biomarkers such as VEGF or PD-1 expression, or secondary endpoints such as progression free survival (PFS), to feed the general hunger for short-term results. Trouble is, it can be quite easy to overstate the significance of those substitutes, especially when they turn out to contradict the final OS data. I have noticed a growing use of the non-OS measures in ways that make them sound like the main story, as if they were superior indicators of the drug’s benefit, even though they are plainly listed as secondary from the beginning to the end of the trial.

Such representations face a wide continuum of observers, from credulous to cynical. Mainstream reporters may be predictably critical of the biopharma industry in general, but amazingly dazzled by its earliest research. Press releases become news stories, word for word. Or the reporter may even add some fantasies about future treatment applications along with the obligatory vignette of a suffering patient praying for a cure in real time. “It’s gotta work!”

But I admit, these are easy targets, the everyday extremes that perpetually rise then fall like confetti caught in the rain. It is possible to avoid them, starting at the company level. In another blog, “The Solar Eclipse And Other Irrelevancies,” I described how a small biopharma might go about writing a press release, presuming it was so inclined. The effort may be collaborative, but the outcome can often be a mess — a mishmash of impenetrable science-speak and corporate-like hedging. Many young enterprises look at the results and give up entirely on communicating with the outside world; others never wanted to at all.

That, I’m convinced, is a bad idea. Because of this self-imposed isolation, as many companies may go under as those that expire due to clinical failure. If you’re not communicating, you’re probably living on a shoestring and hoping against hope the world will come to you once you miraculously traverse the development path to an approved product. Your market cap, total funding, and cash on hand are all dreadfully low, but your burn rate refuses to fall any further. Some big Pharma company may someday find value in your failure by using it in aggregate with many others to justify a record price for any drug it develops matching yours in indication.

When I interview company heads for something like Companies to Watch, I routinely ask them how much time and attention they have spent on developing the language for the standard company and product description — the one they can use in a brief introduction when meeting a complete stranger.What kind of company are they? How specific is their focus? What is their lead product candidate’s therapeutic area, target indication, and mechanism of action? If applicable, what are the other programs in the pipeline? What kind of evidence exists for proof of concept, and what still remains for the company to prove?

Just say it, without embellishment, as simply and clearly as possible. Use words your audience will understand. Don’t assume the entire audience comprehends scientific, technical, or corporate jargon. Listen to your local English major, who will follow the declarative principles of Strunk & White’s Elements of Style, such as “use active voice” and “omit needless words.” Make sure each round of edits reduces rather than increases length. The description should contain a single sentence that delivers a quick, effective summary, such as, “Our company is in early stage development of a novel checkpoint inhibitor linked to a diagnostic test.”

The final product will state your case economically, honestly, and effectively — and in a standard language everyone in your company can employ. Above all, readers (and hearers) will find it clearly meaningful, free of of bravado and other distractions. It will not encourage inflated expectations or conjecture, but it will support the genuine hope that drives your company. The world will then know what you are trying to do, and you will have a chance to attract the interest of investors in helping you move forward.