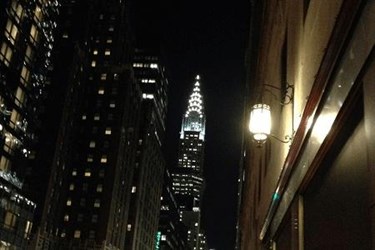 Going in or out of New York City, you can travel through blocks of narrow cross streets, where little shops and loading docks comingle in dingy darkness, then suddenly turn a corner to behold a breathtaking monument such as the Chrysler Building. Once again, it is an experience in contrast I and many others could hardly escape when visiting the Big Apple to attend the BIO CEO & Investor conference earlier this month (#BIOCEO17, February 2017).

BIO’s get-together in New York comes just a month after the JP Morgan Healthcare Conference in San Francisco, and the two events offer contrasts beyond distance or location. JPMHCC can hardly contain itself; it is limited and compressed by design into a finite space, yet it draws many thousands of people and probably hundreds of companies to meetings and co-occurring events outside the main attraction. BIO CEO offers the opposite qualities of exclusive attendance by an ample but manageable crowd where no one gets lost. People move easily between general sessions, company presentations, and face-to-face meetings or lollygag productively in the old ballroom at the Waldorf Astoria. Of course, this is the same grand old hotel that will soon undergo closure for extensive remodeling, reportedly into condos and a much smaller version of itself. All things must pass.

I spent most of my time at this conference attending sessions and company presentations, tweeting frequently, and occasionally taking part in the Q&As. Many of the companies on my radar this year are in the metabolic/endocrinology area, over which diabetes has long reigned. But the area is now expanding noticeably into other spheres such as neurodegeneration and cardiovascular. As Albion Fitzgerald, chairman of CohBar, says in the most recent edition of The Enterprisers (Life Science Leader, February 2017), “During the next 15 years, there will be five times as many deaths from noncommunicable diseases as from the old historic communicable diseases, and most noncommunicable diseases are metabolic diseases.”

A good example at BIO CEO was CymaBay, one of a growing group of small companies developing new drugs for treating endocrine disorders with either no or unsatisfactory therapeutic options, such as gout and liver disease. My tweet from the company’s session: “CymaBay presentation convinces me the next Hot New MoA series should focus on new Tx in development for metabolic diseases.” As in our previous series on immuno-oncology and neurodegenerative diseases, I am planning a “virtual roundtable” to compare and contrast the views of companies and key opinion leaders in the metabolic area and draw useful business lessons from the virtual exchange. Stay tuned.

One of the other presentations I witnessed was by ThromboGenics, a Belgian company developing several drugs for treating conditions in the back of the eye, or vitreo-retinal disorders, mainly in diabetic retinopathy. The drugs target a variety of disease mechanisms: angiogenesis, fibrosis, inflammation edema, and neurodegeneration. Through partners, the company markets one drug, Jetrea (ocriplasmin), indicated for symptomatic vitreomacular adhesion and other conditions. Ocriplasmin formerly bore the name microplasmin because it is a proprietary, truncated form of plasmin, with the same ability to lyse blood clots. Oncurious NV, a joint venture of ThromboGenics with Bioinvent and the U.S.-based Neuroblastoma and Medulloblastoma Translational Research Consortium (NMTRC), is also developing an inhibitor of the angiogenic placental growth factor (PlGF), initially to treat the pediatric brain cancer, medulloblastoma.

“Obesity global metabolic challenge. AptamiR has miRNA fat-reduction agent into clinic 2017. Tgts belly fat, where diabetes begins.” So read my tweet from another company presentation. In the Q&A, I asked why the company also targeted the brain in its long-range plans; was it following the possible connection between diabetes and neuro diseases such as Alzheimer’s? The CEO’s answer was almost grateful. “Yes, that is correct!” he said. Looked at plainly, he explained, the brain may be the biggest concentration of fat in the body and shares some of the dynamics that can affect other fatty areas such as the belly. Beta-amyloid plaque, a protein present in the fatty membrane around neurons and fat deposits around the body, also appears to play a role in the disease process in both settings. It may make perfect sense for a company focused on obesity and diabetes prevention to also focus on neurodegenerative brain disorders.

On the first day, I also attended most of the general sessions, which were mostly topical panel discussions or “fireside chats” with notable executives, such CEO Joseph Kim, who left Merck to found and run Inovio. Chief editor Rob Wright also interviewed Kim and others in “BIO Buzz” videos shot at the conference. My first stop on the agenda was a session on a trendy but troubled area — the microbiome. The panel ranged from Big Pharma, with Nikola Trbovic of Pfizer, to small biopharma developers of microbiome-related products such as Enterome. As might be expected, the former held a cooler and more distant view of the space, but the latter group showed an immediate involvement in pushing the field forward in a variety of ways.

Trbovic said Pfizer recognizes the many correlations between various conditions and the microbiome state, yet it still has doubts about whether the relationships are causal. But Enterome’s CEO Pierre Belichard described how his company is building a body of evidence for causal links from the gut microbiome and Crohn’s disease with its drug/diagnostic combinations, and CEO Mark Bodmer of Evelo Biosciences maintained the links were obvious in the known interaction of the microbiome and immune system. “They regulate each other,” he said. “The gut contains three quarters of our immune cells, so the causal relationship is clear. The microbiome offers many opportunities for therapeutic benefit in concert with the immune system. The challenge is turning those opportunities into drugs.”

CEO Jeffrey Riley of Synthetic Biologics cited his company’s development candidates as examples of such a transformation; traditional small molecules to protect useful microbiome species from damage by antibiotics, thus maintaining a stable, healthy environment in the gut. EpiBiome’s CEO, Nick Conley, also pointed to his company’s approach in developing viral phages to replace antibiotics in targeting pathogenic bacteria more precisely. All of these approaches are relative early stage, even preclinical to a great extent, so they have a long road with many possible obstacles and setbacks ahead of them.

It would be a lengthy exercise to describe every BIO CEO session I attended, but I will give my own idea of the bottom-line, takeaway conclusions for the two others I found most substantive.

Opioid Alternatives: Most of the panelists were on the industry side, naturally defending their abuse–deterrent products and the interests of patients in real pain who do not abuse the system. But the main theme was new mechanisms of action in development as alternatives to opioids, because — abuse them or not — the current climate is pushing nearly everyone off opioid maintenance for chronic pain. The question I did not ask: Is there a chance that any medicine that takes away an unbearable pain will trigger the release of endorphins and thus prove just as “addictive” as the opioids they replace? I have been writing quite a bit about this topic lately, including the Life Science Leader cover story on Grünenthal to appear in March.

One last thought: there may be no objective way to confirm or measure pain in patients, but people with spinal-cord injuries react to unfelt pain with autonomic dysreflexia, when the pain signals feedback through the involuntary nervous system to cause errant sweating, heart and breathing disruptions, and often violent spasms. Pain is real, even when you cannot feel it.

Immuno-Oncology: Pfizer, Infinity Pharmaceuticals, Sorrento Therapeutics, and Heat Biologics were represented on this panel, mainly discussing the candidates and claimants outside the checkpoint-inhibitor class of cancer immunotherapies. With the exception of CAR-T, most of the new developments are existing or new drugs and biologics intended to complement checkpoint blockade. Some aim to help immune cells target cancer more precisely once a checkpoint inhibitor has unmasked the tumor so the immune system can recognize it. Others aim to boost production of killer T cells to attack the unmasked cancer. Two issues:

Other sessions touched on issues outside therapeutic-area development such as the sociopolitical environment for the industry, the future of drug pricing, and the continuing battle to win a positive public image of the biopharma community. The discussions were frank, full of uncertainty, but still hopeful for the industry’s future. It was a pleasure to see such a wide range of ages, world regions, and cultures represented by the attendants. Random conversations reinforced my impression of this community as a most creative crowd, always on the lookout for new challenges and set on devising solutions.

My most interesting conversation at BIO CEO was with someone who joined his first pharma company decades ago in the midst of a severe geopolitical disruption. As the nascent company’s native country let go of its old African dominions, the researcher-founder maintained connections to the ex-colony until the subsequent violence there severed all connections. But the “third-world” focus of the company ultimately found success in the first world far beyond the expectations of most observers. It went on to set an astounding record for the rate and number of NCE introductions worldwide, continued its creative performance even after coming under the umbrella of a global giant, and ultimately passed its name and mission on to the entire biopharma division of the same conglomerate. The conversation at BIO CEO will form the basis for an upcoming edition of the occasional series, Industry Explorers Blaze On.